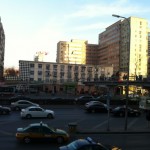 Earlier this week the Economist Intelligence Unit released “Hot Spots,” a report commissioned by Citigroup that “ranks the competitiveness of 120 of the world’s major cities.” There aren’t many surprises: US and European cities remain the most competitive overall; Asian cities do well economically; New York and London are ranked 1-2. We in Beijing really... Read more »