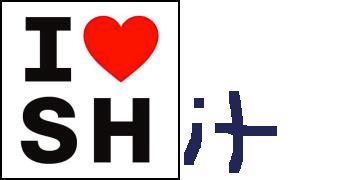 Shanghai Calling is a movie about a confident, ambitious, career-minded Chinese American named Sam who gets called into his New York law firm’s office one day and told he’s in for some “big news.” As he prepares to humbly accept what he believes is a promotion, he’s told, “We’re sending you to China!” Uh-oh. China is a land of dirt paths, sandpaper sod, plastic evergreens and old men cradling chickens in the crook of their arms. How could he ever…

But don’t worry, Sam: China ain’t just about farms. Nuh-uh. China is… Shanghai. The Bund. Glassy high-rises. Metallic-blue reflective windows. And people, commotion, activity – people like this little girl waving at you from the back of a bicycle. To illustrate how figuratively fast everything is moving, the camera is placed inside a moving vehicle and records slivers of the urban cityscape, which are edited into a montage exactly like the one that kicks off Karate Kid.

The first person Sam meets in the airport is relocation specialist Amanda Wilson. He is taken aback because she is blond, and he’s not used to imagining himself laying blonds, but hey, now he’s in China so anything goes. She lobs some approximations of Mandarin words at a cabbie, and Sam’s like, “You speak Chinese?,” and she ripostes, “Don’t you?”

In the next few scenes, the trailer establishes that Sam is out of his element: he’s chided by a fat woman as he emerges from a shower (“I got nothing”); he utters by way of wit, “I’ve never been above 79th Street”; he asks a cabbie to take him to an address and is driven 10 meters before being told, “Daole” – here.

But Sam is not completely hopeless. At a charming gray-bricked bistro, Amanda tells him, “Let me guess. You only moved here because someone offered you a big promotion. I’ve seen your type before.”

Like Archimedes in his fateful bath, it dawns upon our woebegone protagonist – possibly without him realizing it – that he is as guilty of prejudice as this woman typecasting him to his face. Off-screen, he considers (we can only assume): perhaps I am just a nice guy trapped in the body of a New York careerist. He’s lost his way in the insular world of Wall Street, and here he has the chance to start anew. It won’t be easy. He’ll have to quit his high-paying job, turn his back on “his team,” and for a while he won’t know where to find good sushi. But with Amanda, together, just maybe he’ll make it in this crazy, fast-changing, wonderful place…

Shit, sorry, I’ve totally jumped ahead. We haven’t even gotten to the conflict yet. Sam’s company’s client has double-sold their licensing agreement to a local manufacturer. Sam runs, bikes, waving his hand and shouting, “Move, move!” Via teleconference he is told, “Fix this, or I will make sure this stink follows you for the rest of your career!” It’s pretty obvious, if you haven’t figured it out by now, that the mistake lies entirely with the New York firm, but the trailer doesn’t have to give away everything. Soon after we’re introduced to Awesome Wang, a prim middle-aged IT guy who’s Shanghai’s version of the bad-ass fixer. And a little later, a Chinese girl tells Sam in her most earnest facsimile of an earnest voice, “I really want you to succeed in this job.” Would she blow him? Hmm.

Possibly you should know that Alan Ruck plays a foreigner who has “fallen in love with Chinese culture,” and that Bill Paxton takes Sam to the Bund at night and declares in the most cliched way possible, “This is the new land of opportunity.” Yeah! There’s a pretty funny scene with tealeaves involving a hot Chinese girl who I think is the same one who really wants Sam to succeed, but I can’t be sure. Here she is: 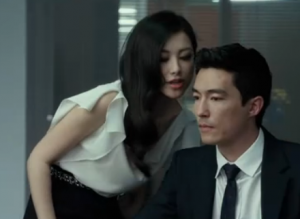 SOMETIMES THE LANGUAGE YOU DON’T SPEAK

Cue music. A sweeping Citizen Kane-shot of Sam standing tall with a blue sky above him. The kiss.

IS THE ONE THAT SPEAKS TO YOU

“Just remember which team you play for.”

“Which team is that, exactly?”

“I can see myself staying here a little bit longer.”

2 Responses to “Shanghai Calling: We Watched The Trailer So You Don’t Have To”