Just as we were talking about chengguan, the Twitter feed of That’s Mandarin tipped us to a video “going viral right now” of more than a dozen middle school students in Zaozhuang, Shandong province beating up a chengguan, who are unofficially this country’s “city management officers” and more unofficially this country’s street thugs disguised as people with... Read more » 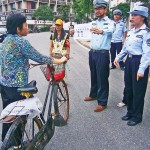 I don’t know Josh Garcia, 23, nor do I know the city of Cleveland, Tennessee, the place from which he hails. Short of any other information, it’s probably unfair for me to judge him for “[leaving] Zhuzhou in Central China’s Hunan province next week, with a uniform of chengguan, a urban management officer, a gift from... Read more » 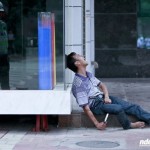 Image via ifeng, taken in Foshan. It’s been somewhat of a stressful day for the blog, considering our server went down for several hours. Apologies for it all, and the lateness of these links.