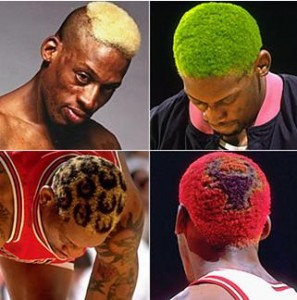 Dennis Rodman is going to North Korea. I know I typed the exact same thing in the headline, but it bears repeating. Reports AP:

Arriving in Pyongyang, the American athlete and showman known as “The Worm” became an unlikely ambassador for sports diplomacy at a time of heightened tensions between the U.S. and North Korea. Or maybe not so unlikely: Young leader Kim Jong Un is said to have been a fan of the Chicago Bulls in the 1990s, when Rodman won three championships with the club.

That’s great, just great. It’s slightly disheartening to see he’s accompanied by VICE, which produced one of the more self-serving and factually incorrect documentaries on North Korea in existence (DPRK scholar Andray Abrahamian nicely outlines its flaws in his paper North Korea and Documentary Film), but none of us can claim to be surprised that this “ambassador for sports diplomacy” might not have Kim Jong-un’s best interest at heart.

We very much hope, however — if there’s one thing we hope for besides averted nuclear war — that the man known as “The Worm” compares hairstyles with the Outstanding Leader during his trip. Why? Via Reuters:

North Korean heir-apparent Kim Jong-un’s slicked-back, high-sided haircut is a fashion hit in Pyongyang where young men are apparently queuing up for a similar cut.

(Queuing up for a similar cut? I thought that wasn’t allowed.)

The chubby youngest son of the current leader, Kim Jong-il, slicks his hair back at the top, and has it trimmed to the scalp to about an inch above the ears.

Interesting hair. That’s one point of commonality between Rodman and Kim.

If you think of a second point, please let us know.

It's true, I'm in North Korea. Looking forward to sitting down with Kim Jung Un. I love the people of North Korea. #WORMinNorthKorea

They love basketball here. Honored to represent The United States of America. #WORMinNorthKorea