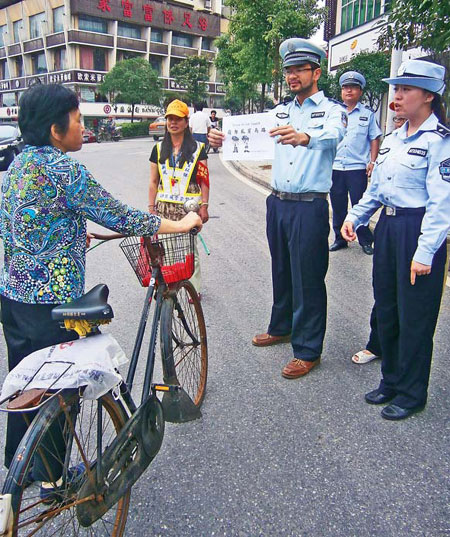 They're not saying "boo." They're saying "get the fuck out of my face."

I don’t know Josh Garcia, 23, nor do I know the city of Cleveland, Tennessee, the place from which he hails. Short of any other information, it’s probably unfair for me to judge him for “[leaving] Zhuzhou in Central China’s Hunan province next week, with a uniform of chengguan, a urban management officer, a gift from the local urban management bureau for his temporary service there,” as reported by China Daily.

But Josh, I will presume to give you this advice: don’t wear that uniform too proudly around these parts. You’re not endearing yourself to anyone. Here’s a chengguan beating up a mother with her eight-year-old son nearby. Here are stories of chengguan abusing street vendors. Time called chengguan “China’s bully law-enforcement officers,” and that really is about as nice a way of putting it as possible. Don’t think this is Western media bias, either. Check out this Human Rights Watch report (pdf) titled, “Chinese State Media Accounts of Chengguan Abuses.”

Knowing this context, these paragraphs suddenly read differently, don’t they?

On Thursday, he took local residents by surprise when he appeared on the streets of Zhuzhou wearing a chengguan uniform and performing the duties of an urban management officer.

“Many people found it funny and stared and laughed at me. Some kids followed me around for a while, mimicking everything I did,” he told China Daily.

“But the people we caught jaywalking were not as happy,” he said.

They’re not happy for several reasons. For one, Josh, you “caught” people “jaywalking”? In this country? What kind of moron are you?

For two… see above, regarding chengguan.

Garcia took up the job at the invitation of Yang Hao, the chief of urban management officers in the Shifeng district of the city, who is also his friend.

“We think it is a good practice to set up a friendly image of chengguan,” he said.

“He is my best friend in China and I believe what he does is good for the city. So I did not hesitate,” Garcia said.

…makes you look like the biggest tool this side of Orange County.

Obviously, it should be noted that not all chengguan are bad people. Some, in fact, are not uneducated thugs who report to mafioso-like goons with watermelon potbellies and fat pockets. Some — as the China Daily article notes — are even women… perhaps softening the image of the male chengguan whose crimes remain unpunished. And some, it must be said, are simply naive, wide-eyed striplings who needed a job, so they were asked to go patrol the streets in a uniform that gives them a false sense of authority and power, utterly unearned and misappropriated.

That’s that uniform you were given, Josh. Just thought you’d like to know.

11 Responses to “This Foreigner Proudly Dons Chengguan Uniform, Outs Himself As Massive Tool”