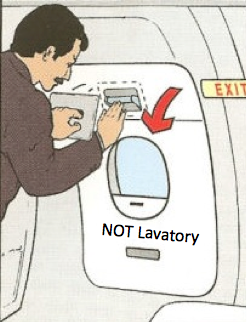 We want you to note that this particular 52-year-old Chinese passenger on a Hong Kong Airlines flight from Bali had to be restrained, as AFP puts it in a short five-paragraph story published yesterday:

The door failed to open and crew stepped in to physically restrain the man, who was identified only by his surname Peng.

“When the police questioned him after landing, he said he thought it was the toilet door, since this was the first time he had travelled on an aircraft,” an airline spokeswoman said.

On the bright side, no one got into a fight and the plane didn’t turn around and land back in Bali.