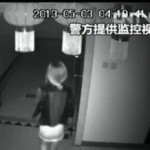 Surveillance footage has surfaced purportedly showing 22-year-old Yuan Liya entering Jingwen Mall in south Beijing on the night of May 2. She would fall to her death several hours later -- not seen on tape -- in what police have ruled was a suicide. Authorities reportedly blocked Yuan's family from seeing this footage last week, which was one of the reasons cited for an unusually large protest in front of Jingwen on May 8 that caused gridlock and an increased police and paramilitary presence through the city center. 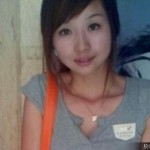 The headline says it all, but here's the story: The Beijing police say they have arrested a woman for spreading online rumors in connection with the death of a migrant worker that touched off a rare protest in the Chinese capital on Wednesday. A 28-year-old Beijing woman surnamed Ma was arrested Thursday for writing on Sina Weibo, China’s largest Twitter-like microblog service, that the dead woman had been raped by seven security guards at a clothing market and then jumped from the building. This Beijing protest on Wednesday. 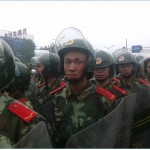 At the start of this POV video taken at Wednesday's protest near Jingwen Shopping Mall in Beijing's Fengtai District, the people chant kangyi, "protest." As a collective they rock back and forth, like a wave. It surges in fits and starts, apparently toward uniformed officers. There is safety in numbers -- civilians outnumber cops -- so individuals feel little hesitancy to shout whatever they please. But there is also a kind of muted chaos.