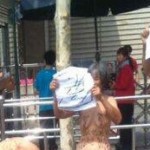 The above was tweeted out by @beidajin this afternoon: around 10 am today* outside the US embassy in Beijing, four grandmothers from Xinyang city, Henan province took off their clothes and raised signs "to cry out for sons and daughters."

Four female students from Wuhan University in Hubei province demonstrated on February 14 to call for respect for sex workers in China. One student held up a pair of underpants as a metaphor for the Big Underpants building in Beijing, i.e. the headquarters of China Central Television (CCTV), which has been pejoratively called "CCAV" (AV being adult video) by Chinese netizens. 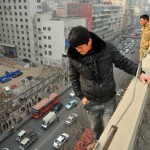 Confrontations over unpaid wages are common in China, especially in the run-up to the lunar new year (it falls on January 31 this year), as this is often the only time when migrant workers can return home. Many fear they'll never be paid if they leave the city while still owed money. But to get paid, some have to resort to extreme measures.