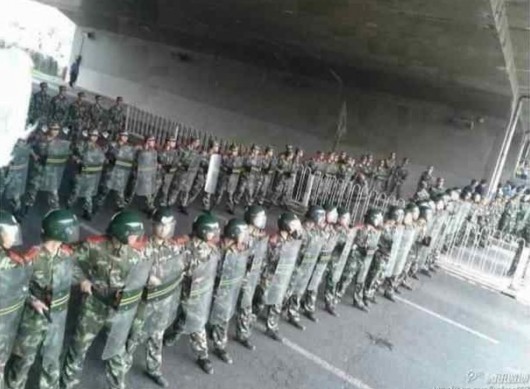 A massive police and paramilitary presence has descended upon Fengtai District around Jingwen Clothing and Apparel Shopping Mall, the scene of either a suicide or murder last Friday.

On May 3, a young woman from Anhui province fell to her death from the Jingwen building after allegedly being gang-raped. Police hastily ruled her death a suicide and refused her family’s request to see the surveillance footage.

This afternoon, thousands (edit: possibly only “hundreds”) of people — many who are migrant workers from Anhui — gathered in a planned protest between Jingwen and Yongdingmen, a gate just south of the Temple of Heaven on Second Ring Road (a few kilometers north of Jingwen). Hundreds of police have shown up in turn, many in riot gear. Traffic is reportedly backed up for miles.

As of this moment, Baidu searches for “Jingwen” are blocked “according to relevant laws, regulations and policies.”

One clever netizen, @伊莲娜月光手帕, has posted the following pictures with the comment: “今天北京YONG定门” (“Today at Beijing’s Yongdingmen,” with YONG written in English to elude censors). Please take note of the chat conversation that follows, which was posted about fifteen minutes ago. Our translation:

- Something big happened in Beijing.

- Across from me a shopping center, Jingwen. An Anhui girl was gang-raped by Jingwen security guards, then leapt from the sixth story.

The nearby cops say it was suicide, there’s no case. Jingwen boss has influence

Right now Anhui people, a few thousand others are preparing to march to Tiananmen.

If indeed a march to Tiananmen was planned, that might explain the above blockade.

We’ll give you updates as we learn more.

UPDATE, 6:29 pm: The posts are disappearing fast from Sina Weibo, but here’s a screenshot: 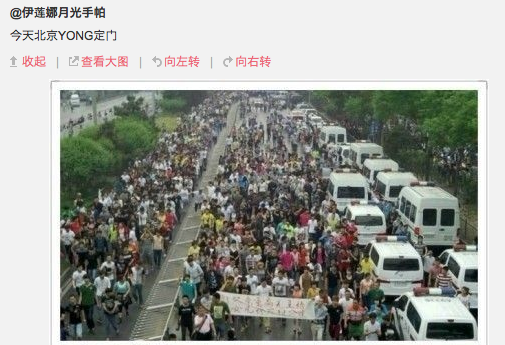 7 pm: There are virtually two PLA soldiers on every block along Dongzhimen Outer Street. Very unusual. Anyone finding increased security in their neighborhoods?

7:25 pm: The first video has appeared, via NewChinaChannel:

8:15 pm: Don’t say authorities don’t know how to handle these type of situations. According to someone on the ground, traffic remains backed up because police have sealed off the area (caveat: though it’s sometimes hard to tell the exact cause of evening Beijing gridlock). “Small mobile clusters” of cops are roving and keeping watch on those approaching Yongdingmen.

8:37 pm: Via the Beijing Public Security Bureau’s Sina Weibo, timestapped 11:17 am (translating errors are mine):

May 8, 2013 at 10 am, approximately a hundred people from outside the city came to Beijing Fengtai District and gathered in front of Jingwen Shopping Center. The Public Security Bureau quickly mobilized with relevant departments and police to handle the situation. According to preliminary understanding, in the early morning on the 3rd of this month, a young woman from Anhui died after falling off the Jingwen building, and a segment of those who gathered today were from her hometown who went to Jingwen’s door to make the issue known. At present, police are maintaining order at the scene.

Also, cleaned up some typos, etc. End of updates.

More on this topic: