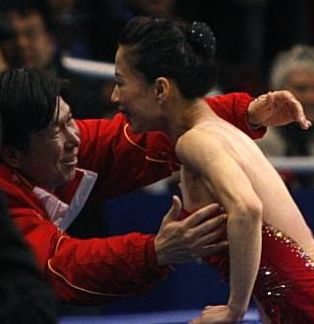 Recently, it seems like everyone is hugging. Friends are hugging. Family members are hugging. In hugging between Chinese and non-Chinese, it was non-Chinese who once foisted physical affection on the Chinese. Today it may be a Chinese initiating contact. The tables are turning.

Depending on who you are.

Most friends I’ve asked say the change is due to exposure to the West, especially huggy North America. But other Asian nations — even formal Japan — may also be involved, according to a recent article in China Daily headlined ‘‘Students Use Hugs to Ease Tensions.” It described ‘‘hugging activities’’ between a group of Japanese studying in Beijing and Chinese passers-by, in which the students hugged about 200 Chinese in an effort to warm feelings between people of the two nations sparring over territory in the East China Sea.

The initiator, Watanabe Kohei, said, ‘‘The Chinese were a bit shy in giving hugs,’’ but friendly.

The article’s next sentence is, “Not everyone is joining in,” so it’s not all warm and fuzzy. It is mostly though. If you need a guide on how to hug, try this wikiHow, or make friends with a North American.

But please remember: don’t hug little girls in the bathroom with a water bottle in your pants…