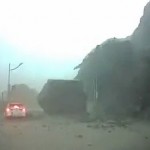 A driver nearly had the misfortune of being crushed underneath a rolling boulder on Friday in the port city of Keelung, Taiwan. Watch as a huge-ass rock lands just to the right of the car. The driver would exit not only alive but uninjured. 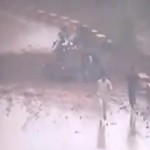 Torrential rains have caused floods and landslides across northern China, resulting in 50 deaths this month in Shaanxi province alone. (And in Sichuan, this death.) But you know which four people the landslides in Shaanxi have not yet killed? 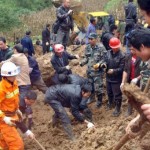 The 18 students from Tiantou Primary School buried under landslides yesterday in Yiliang, Yunnan province have all died. Via AP: Any last hope for survivors evaporated early Friday when rescuers pulled the body of the last missing child from the landslide debris, China National Radio said in a report on its website. What’s even more tragic about... Read more »

Yiliang county, Yunnan province was hit by massive landslides yesterday that buried 19 people, including 18 children, and killed at least 10. A TV news show on Shanghai-based Dragon TV, amid an informative segment about the where/what/when of the matter, plopped in a rather... distracting depiction of the landslide. Take a gander for yourself. 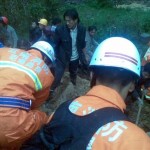 Around 8 am yesterday, Zhenhe Village in Yiliang county, Zhaotong city, Yunnan province got hit by a devastating landslide measuring 10,000 cubic meters, according to China Daily. Nineteen people — 18 of whom were primary school students — were buried, and so far 10 are confirmed dead. Update: They’re all dead. Yiliang is the same county that... Read more »