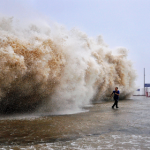 Okay, so by the looks of this, he isn't "walking." More like running. 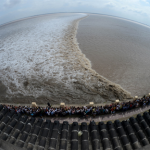 A tidal bore, in which "the leading edge of an incoming tide forms a wave (or waves) of water that travels up a river or narrow bay against the direction of the river or bay's current," as defined by Wikipedia, caused hundreds to gather at the bank of Qiantang River Haining, Zhejiang Province yesterday. 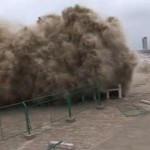 On thy cold gray stones, O Sea! The tender grace of a day that is dead is not at all what these bystanders on the banks of the Qiantang River were considering when ferocious waters and 30-meter-high waves caused in part by Typhoon Trami swept them off their feet. 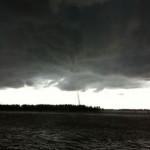 According to Wikipedia, a waterspout is "an intense columnar vortex (usually appearing as a funnel-shaped cloud) that occurs over a body of water, connected to a cumuliform cloud. In the common form, it is a non-supercell tornado over water." That's awesome. 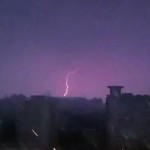 The thunderstorm that swept through Beijing on Sunday filled us with a collective terror that ramified into the outer ring roads. Everything that follows is true. 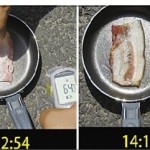 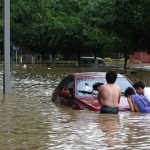 It's raining everywhere, and not the good kind, under which one might twirl around a lamppost. In Liuzhou, Guangxi, rains have caused flooding and prompted local blogger Liuzhou Laowai to exclaim, "It’s a holiday. It has to rain!" Here are more pictures of afflicted Guangxi towns via Xinhua.