But first, serious news, via Xinhua:

Shanghai is set to have the hottest July since weather records started being kept 140 years ago, local meteorological authorities said Monday.

The Chinese financial and business center had 23 days in July when the daily high temperature was recorded at or above 35 degrees Celsius, equalling the current record, according to the city’s meteorological center.

Anyone want to go for a dip? 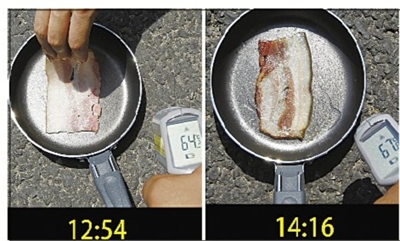 The World of Chinese:

Reporters in Shanghai set out to test just how unbelievably hot the day was by doing an experiment: cooking. The reporter went to the People’s Square and laid a piece of pork (五花肉, wuhuarou) on the marble floor. After thirty seconds, the bottom of the meat was already white. After ten minutes, the pork was medium-well done. The reporter also stood a candle on the ground, which started to melt shortly. You can watch how the experiments were done in the video below, starting at 1:44.