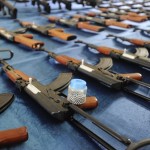 April 13, 2014, the day China was made safer... from airsoft guns and swords to be sold to tourists. Sounds ridiculous, right?

The "emergence" of punk, in 2008, was a social interest story, as international media arrived in Beijing for Olympics coverage but "discovered" Chinese rock. It's different now, as Nevin Domer, COO of Maybe Mars and founder of Genjing Records, explains in our latest episode of The Creamcast.

Long-time Beijinger and The Local owner Kenn Burmel enlightens hosts John Artman and Amy Daml on why his bar is no longer called Brussels, how he survived SARS locked into his dorm (people had a lot of sex), and what exactly propelled The Local to an improbable 2nd-place finish in last year's the Beijinger Burger Cup (including a shocking -- shocking -- victory over Blue Frog).