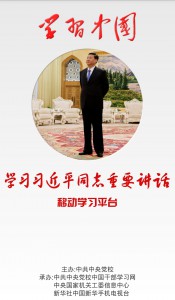 The Cheese Stands Alone: Welcome You to the Xi Jinping Phone App

Something for the weekend, sir? With Chinese cadres under official instruction to behave themselves for, perhaps, ever, the kind folks at Ccln.gov.cn, a website operated by the Central Communist Party School, have offered them a replacement entertainment to getting lobster-faced and curling up with a dead-eyed mistress.

The classics-quoting, picture-rich, cutting-edge “Learning China” app was launched yesterday, and is set to blow your mind – or your phone. Just three minutes after I opened the app, my two-year-old HTC had frozen up –  like its owner, it was obviously having a hard time processing all the fun.

I restart the phone. OK, here we go.

“Everyone can find something that interests him or her,” says Chen. It’s a bold claim and therefore one Beijing Cream was keen to test. Let’s have a look, shall we?

In “Mini Courses,” you may watch 5-7-minute videos, each explaining one of the important political credos dreamt up and spat out since Xi’s big takeover, such as “Hong Kong-Shanghai Express,” “Bottom-Line Thinking” (aka, pessimism, fyi), “The Four Comprehensives,” “One Belt, One Road” etc.

If, by any chance, you need to search for any speech made by Xi at any time and any place, you may go to the star feature of the app, “Live Map” – which is neither live, by the way, nor a map – and see the complete. footage. of it. Thus: 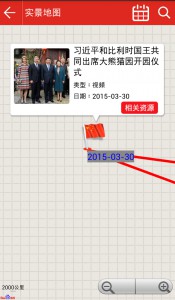 Sing it with Xi: We’re on the road… to rejuvenation… Altogether now!

In this cut, entitled “Xi Jinping attends Panda Garden opening ceremony with Belgian King,” you can see a series of bored white men standing in front of stereotypical Chinese buildings, with Xi Jinping and… a panda! A true bargain: Seen one, seen too much. (Actually, that panda one is a bit of a stand-out. Well worth a look.)
Our favorite tab, and sure to be yours, is obviously the “Xi Jinping Anecdotes.” It’s a combination of heart-warming stories about courage and hierarchy in the face of adversity – “Xi Told Underling to Buy Rubber Shoes for Flood Victim” – and Buzzfeed-style listicles (“15 Comments Foreign Leaders Made on Xi Jinping,” “10 Bits of Trivia That Show Xi’s Respect for the Elderly”) that try hard to make you regret clicking on them: the old clickbait-and-switch.
The app, unfortunately, isn’t available in Google Play yet, because Google notably gave CNNIC, who endorsed the app, a big and well-deserved screw-you just days ago for abusing the trust placed in it by the search engine to outsource its security certifications and thus allowing MITM attacks.

Comments are already beginning to trickle in on the App Store, and it’s clear that someone is having a chuckle. One review claims to be from a thief who promptly returned the stolen phone after reading the app and seeing the error of his ways.

Another simply notes: “Under Boss Xi’s leadership I downloaded this app instantly when I saw it. It’s so impressive I’ve been brought to tears. Boss Xi’s footprints are all over the world and his speeches motivate the whole country. I must use this app everyday. Boss Xi is the guide and the light. Thank the author!” 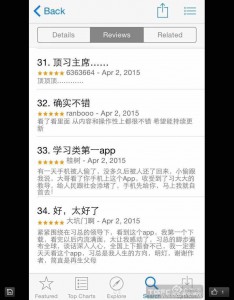 It’s getting harder to separate wumao from parody these days

But you may download it directly, using an iPhone or just a phone. Personally I wouldn’t keep it for long on my phone, but that’s just me. The thing is definitely not riddled with spy and malware.

*Quick Xi Jinping 101: Xi Dada is the cute nickname given to Xi by the propaganda department his adoring people. Means Uncle Xi, not Father Xi (that would be creepy).

2 Responses to “App’s What Xi Said: China’s President Is Now On Your Phone”