Anything the New York Times can do, the Wall Street Journal can do better. Reporting: The Wall Street Journal said Thursday that its computer systems had been infiltrated by Chinese hackers for the apparent purpose of monitoring the newspaper’s China coverage. If you’re not being hacked and monitored by the Chinese, you’re just not important... Read more » 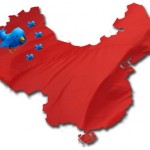 China Digital Times has noticed something very strange happening on Twitter: several high-profile China watchers have reported receiving warnings about attacks on their accounts. Which shadowy cyber prankster would dare try such a thing? Or is this the work of a more sinister agent of the People’s Republic branch of Anonymous? It seems wrong to... Read more » 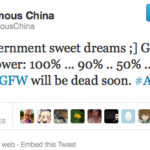 Confession time: I’m petrified of Anonymous. As someone who is hopelessly clumsy when it comes to web hosting and IT, I know how easy it can be for an experienced hacker to ruin my day. But then again, I have nothing to hide. I — unlike Fang Binxing — did not engineer a “Great Firewall”... Read more »