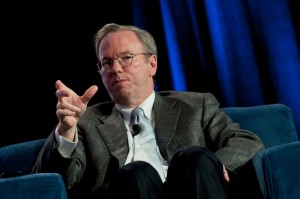 Google chairman Eric Schmidt has a new book ready to debut in April, The Digital Age, co-written by Jared Cohen, formerly of the State Department. As the Wall Street Journal puts it succinctly, the book is clear about one thing: “China is the most dangerous superpower on Earth.”

“The disparity between American and Chinese firms and their tactics will put both the government and the companies of the United States as a distinct disadvantage,” because “the United States will not take the same path of digital corporate espionage, as its laws are much stricter (and better enforced) and because illicit competition violates the American sense of fair play,” they claim.

“This is a difference in values as much as a legal one.”

The U.S. is far from an angel, the book acknowledges. From high-profile cases of cyber-espionage such as the Stuxnet virus that targeted Iranian nuclear facilities, to exports of surveillance software and technology to states with bad human rights records, there is plenty at home to criticize.

But they’re not engaged in the same scale of corporate (and media) espionage. Should they be? Here’s the controversial part:

Take the equipment and software that comprises the Internet. Most of the world’s IT systems were once based almost entirely on Western infrastructure, but as Chinese firms get more competitive, that is changing, and not necessarily for the better, they say.

The authors probably won’t find a more vociferous critic than WSJ itself: one editor, in a rather breathlessly written editorial, recently stated, “The Middle Kingdom might once have been the center of human civilization. But in the digital world, the Chinese are the barbarians at the gate.”

And then you remember that all non-Romans, to Rome, were “barbarians.” We know how that story turned out.

4 Responses to “In New Book, Google Chairman Eric Schmidt Says China’s Hacking Culture Could Give It A Strategic Advantage”