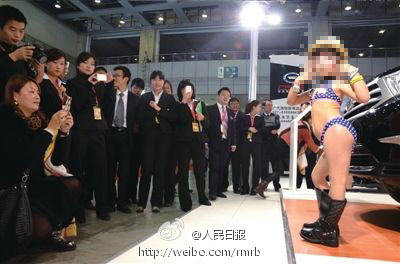 China Daily caught up with one Zhang Ping, general manager of the event’s organizers, 7-Wind Motel Costume Company, and what she said might surprise you.

[She] said the goal was purely to help the children “boost their courage” and no organization or individual made money from the show.

Funny thing, because I did that just now, and here are the top results: 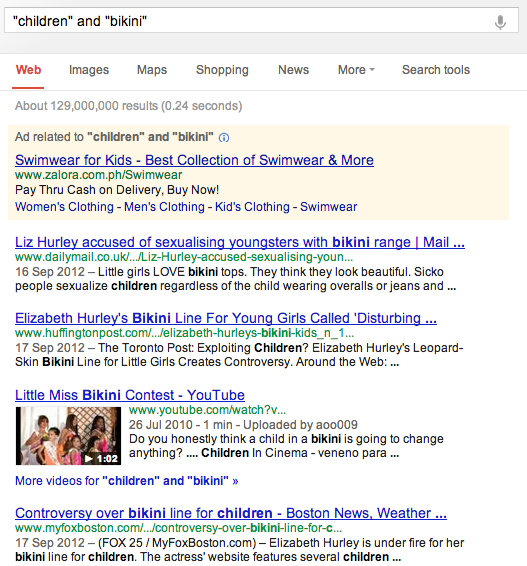 And if we just scroll down a little, here’s what we find: 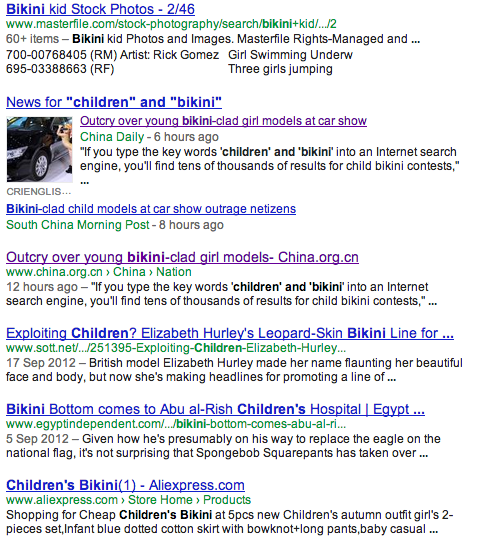 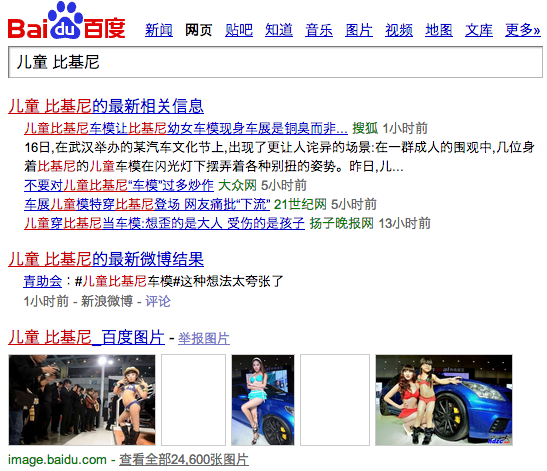 The first page of results is mostly about Chutian Auto Culture Festival. Congratulations, your master plan to gain publicity has worked 10 times better than you imagined.

Just so we’re clear on what we’re talking about: car shows in China often feature scantily clad females (usually adults) who are necessarily sex objects. All car shows have cars, and usually the same ones, and there are hundreds of car shows every year. How do these events differentiate themselves? The women they hire have only one purpose, and that is to bring attention to the product they’re standing next to. Somewhere down the line, organizers realized that having them read Tang poetry wasn’t going to do it. Li Yingzhi, one such adult model, once  became famous for wearing a risque diamond dress at a car show, then went on a Web show and had a hostess feel up her breasts to prove they were real. This is the context in which Zhang Ping inserted five-year-olds, and she didn’t even try to distance them from the context of bikini-wearing adults — they pose side by side.

“But the public should not be fussy, as it’s natural for children to wear bikinis at modeling contests,” Zhang said.

Okay you crazy shrew. Just let it all out.

However, organizer Zhang said the publishing of the pictures online had potentially done more harm than the show itself.

Yeah, it’s our fucking fault. Not just the media, but social media. Because it’s not like we live in the digital age.

Look at the photo above. Look past the adults in suits, all those corporate types. Instead, look at the cameras and camera phones. How many pictures are going to stay on those cameras, or used solely for desktop wallpapers? And how many are ending up on Sina Weibo?

Zhang, who merely wanted to sell some cars (in a country in which this happens), wants to say to you: for shame. In her beautifully twisted and alien mind, it is us who have exploited those children, viewing them in the wrong context, and drawing attention to the purely commercial cause of selling cars. For fucking shame, you guys.