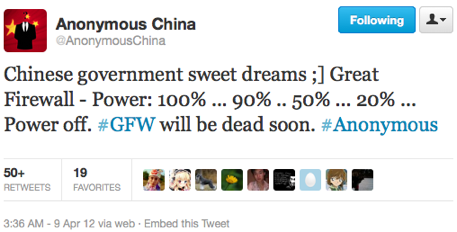 Confession time: I’m petrified of Anonymous. As someone who is hopelessly clumsy when it comes to web hosting and IT, I know how easy it can be for an experienced hacker to ruin my day.

But then again, I have nothing to hide. I — unlike Fang Binxing — did not engineer a “Great Firewall” for the express purpose of making lives difficult (I remind you here that Fang Binxing is “not a walking heap of gelatinous shit”). I — unlike Fang Binxing — do not boast about having six VPNs (I only have one, Witopia), and say, “But I only try them to test which side wins: the GFW or the VPN.” I — unlike some — am happy to speak out against censorship. And I somewhat fashion myself a man of the people, assuming “people” aren’t offended by the word “shit.” Therefore, I think — if Anonymous really is serious about continuing its inroads onto Chinese turf — that at least I’m safe. As for some other people on Chinese Internet…

We don’t know what to make of Anonymous’s plan to “take down the Great Firewall,” or its threats against Chinese government websites, but they certainly have clout — and more than enough credibility to at least draw Reuters’s attention, which reported yesterday:

The activist hacker group Anonymous plans to launch further attacks on Chinese government websites in a bid to uncover corruption and lobby for human rights, a member of the group said on Monday….

“First we want to alert the Chinese government that we aren’t afraid, and we are going to show the truth and fight for justice,” Anonymous hacker “f0ws3r” told Reuters.

I imagine this could be the government’s worst nightmare. It’s easy, relatively speaking, to deal with businesses and other governments: you just send a stern memo to the regional chamber of commerce or have one of your diplomats refuse to smile in the direction of one of their diplomats. But this new game has different rules, which I can only guess is a lack of rules. How do you negotiate with someone who operates from the shadows, is uninterested in diplomacy and undeterred by your lawyers?

The answer is to have a better offense, I think. The hacker known as fows3r might not have any fear, but I wonder if he’s as committed to his attack as his enemies are to their defense — and counterattack, we can only assume. Because China has an army of hackers, too, and judging by what we hear in the media, they’re also pretty damn good at what they do.

None of this will play out in the open, so we’ll just have to wait and see what gets selectively leaked. Storylines abound, that’s for sure.

Oh, and if you’re from Anonymous China, please get in touch. I have questions.

2 Responses to “Anonymous: #GFW will be dead soon”