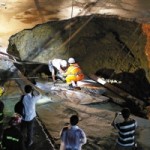 A big hole formed in Shenzhen Longgang District's Henggang Road yesterday at around 9 pm, killing three people. The road collapse is under investigation. Sinkholes are particularly deadly in Shenzhen, apparently. On March 26, surveillance cameras caught footage of a five-by-eight-meter sinkhole killing a man. 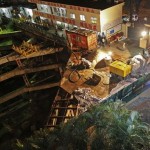 What a world we live in when the ground beneath our feet might open up any moment and suck us under. Yesterday afternoon, a five-by-eight-meter sinkhole that was reportedly four stories deep suddenly formed in a residential compound in Shenzhen. A very unlucky security guard, who happened to be walking past, never stood a chance. He died after efforts to revive him at the hospital failed. 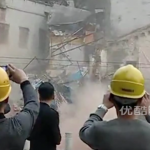 We've seen streets swallow people and vehicles alike, and form a giant ass pattern, but a house? Check. In Guangzhou yesterday near Kangwang Road bus station in Liwan district, the ground underneath a construction site collapsed, pulling six shops into its Stygian depths. 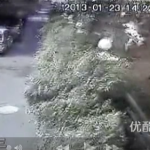 An underground pipeline explosion in Beihai, Guangxi Zhuang Autonomous Region at 2 pm yesterday was captured on tape. A 100-meter stretch of road was destroyed, but the good news is no one died, which is certainly not something we're always able to say about these road collapses. 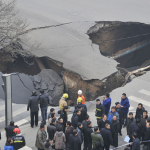 Today in Taiyuan, Shanxi province, a big hole appeared on the intersection of Bingzhou Road and Bingzhou East Road, leaving an impression of two gigantic buttcheeks. Assphalt, if you will. 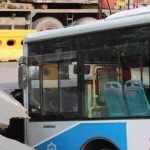 Here's what it looks like to have a bus extracted from a sinkhole. Yesterday morning, a passenger bus in Nanjing, Jiangsu province drove over a subway station under construction (specifically Line 3's Daxinggong Station), and the road collapsed. The accident happend at the intersection of Taiping Road South and Zhongshan Road East. 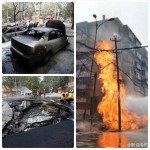 A neighborhood sinkhole in Shijiazhuang, Hebei province on Saturday afternoon caused a gas pipe to explode, sending up a huge column of fire that scorched several cars and forced hundreds to evacuate. After firefighters controlled the conflagration, the resulting pit in the road was 10 meters in diameter. Luckily, no one was hurt. In the video above, a man and small child (let's just assume father and son) stand at a distance and watch, all the way until there's another explosion -- at which point they scurry. 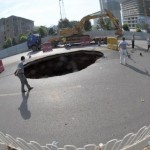 Terrifying. Xinhua reports that “a section of Xiangjiang Road running near Xiangjiang River in Changsha caved in early Thursday, engulfing a passing vehicle and killing at least one person aboard. The cave-in, near the Poly International Plaza, created a 30-square-meter pit on the road.” I have nothing to add. Update, 7/6, 11:51 am: The vehicle had... Read more » 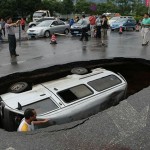 Two weeks ago, Alicia wondered what it would be like to fall through a sinkhole. We now have an answer, thanks to a man in Guilin, Guangxi Zhuang Autonomous Region, who last Thursday had the misfortune of sitting in a minibus just before it was engulfed by a hole opened out of the earth's stygian depths: 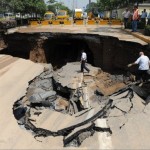 Dear Xi’an, Your roads are not safe. A month ago, we introduced a video of a woman falling through a sidewalk, and while this provided many of us endless laughter, leading me to create a GIF, we were reminded, at the same time, that falling through the street is not normal. In fact, it can have horrifying consequences.... Read more »