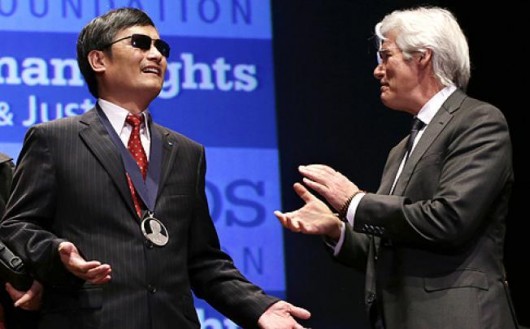 On Tuesday night, Chen Guangcheng received the Tom Lantos Human Rights Prize in Washington DC and delivered a 22-minute speech that was greeted with a standing ovation. Speaking at the National Cathedral, he called himself “lucky” to have received “care and kindness from people around the world” despite the persecution he faced at home; he talked about his fellow activists still imprisoned, and called human rights “inseparable from political reform”; and addressing the US government, he urged it to “continue unwaveringly from your basic principles of democracy.” The website Save Tibet has a full transcription of Chen’s speech. He ended by channeling his inner Michael Jackson: “Let’s work together to make this world a better place!”

James Fallows links to a video of the speech on the National Cathedral’s website, but as of this writing the site appears to be down.

Tom Lantos was the only Holocaust survivor elected to Congress. He died in February 2008, with one of his final wishes being the creation of a non-profit to carry out his work.

For more on Chen Guangcheng, here’s a video of a recent interview he conducted with PBS’s Ray Suarez. The transcript is on PBS’s website.