A big hole formed in Shenzhen Longgang District’s Henggang Road yesterday at around 9 pm, killing three people. The road collapse is under investigation.

Sinkholes are particularly deadly in Shenzhen, apparently. On March 26, surveillance cameras caught footage of a five-by-eight-meter sinkhole killing a man.

Yesterday’s sinkhole is reportedly 6 to 7 meters deep in diameter and 3 to 4 meters deep.

Authorities rushed to the scene after the accident to evacuate residents in the area and rescue those who were buried. One person was reportedly pulled out of the hole and sent to the hospital with non-life-threatening injuries.

The Shenzhen Longgang district government said on its verified page on Sina Weibo, China’s version of Twitter, that five people had died and added that it was investigating the incident.

The sinkhole formed just outside the Huamao Industrial Park in Shenzhen on Monday evening, at a time when many factory workers would have been changing shifts, according to the website of Beijing-based newspaper the Guangming Daily. 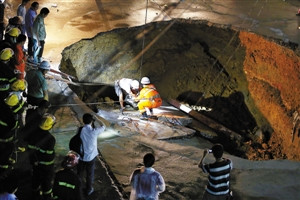 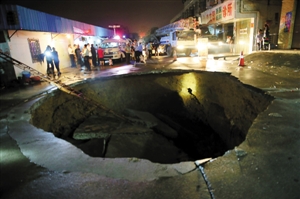