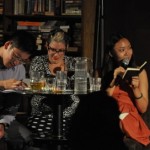 It's Friday! There's an Ultimate Frisbee tournament in Beijing this weekend; head over to Sanlitun on Saturday night to join the party. Links time. 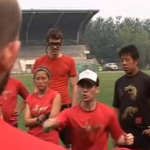 Just when you thought the media coverage would stop, Blue Ocean Network steps up. This six-minute news feature on Ultimate Frisbee, centered around last month's Beijing-hosted China Nationals tournament, is one of the better segments on the sport I've seen anywhere (kudos to Howard Pan, who listened closely to tournament director Alicia). For an additional 38 seconds of bonus footage, click here. 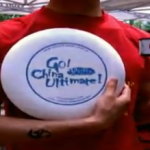 Ultimate Frisbee in the US, despite having a professional league, would kill for the type of publicity China Ultimate has been getting recently. (Recap: CCTV, Hennessy, Sports Illustrated China, Beijing Today.) So why wouldn't a creative company called Niurenku, for which BJC contributor Zozo works, produce a five-minute video about China Ultimate and China Nationals? 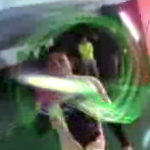 We spent 10 hours filming in a chilly underground parking garage off East Fourth Ring Road last month to produce the 30-second clip you see above (and after the jump, on Youku for those in China). We tossed around a regulation Discraft disc rigged with lights along the inside of the rim and in the middle. At one point, we played a mini game, a three on two within the confines of parking garage columns, and it was a damn miracle that none of us collided with the extras going back and forth on the skateboard and mountain bike. Goddamn skateboarders and mountain bicyclists, always ruining a game of Ultimate Frisbee. It's like Central Park pickup all over again. 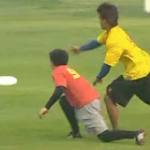 For those of you who play Ultimate Frisbee (disclosure: I do), you'll be interested to know that Chinese state media's sports channel, CCTV-5, came by and did a piece on the Beijing tournament over the weekend that was organized by BJC contributor Alicia. More than 400 players and 24 teams were part of the sixth annual China Nationals, won by Speed, a team of college students from Tianjin Sports University. 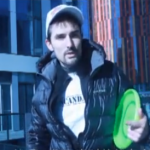 This weekend marks the sixth annual China Nationals tournament, organized by Alicia (disclosure: I'm her assistant), and the fifth year it's been in Beijing. While Ultimate Frisbee may be of negative interest to most of you, realize that Sports Illustrated China, Blue Ocean Network, film companies from Beijing and Tianjin, CCTV-5, and Beijing Today will all be there, interested. In other words, this tournament is getting more media coverage than every Ultimate tournament from 1968 to circa 2009 in the U.S. combined.