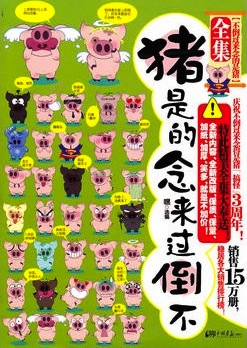 A book called Those Who Don’t Read It Upside-down Are Pigs, among others, has been seized for “spreading pornography,” according to Xinhua, as edited by Global Times. And two publishers, China Pictorial Publishing House and Shaanxi Normal University Publishing House, have been suspended for three months.

Boasting explicit phrases and branding ancient scholars as “rogues,” the book “Those Who Don’t Read It Upside-down Are Pigs” published by China Pictorial Publishing House is full of vulgar content with shoddy editing quality.

“Explicit phrases” is “pornography”? And where do I begin with “branding ancient scholars as ‘rogues’”? Bullshit, maybe. History is so sacrosanct that we can’t risk letting funnymen pollute our children’s minds with non-state-sponsored pedagogy, is that right?

That’s the cynic in me speaking, of course, but help me out here, State General Administration of Press, Publication, Radio, Film and Television: make me a little less skeptical of your motives.

With a cover teeming with cartoon pigs, a hit Chinese book reads, “Taxi driver said, ‘There are many beauties in your school, but they are expensive.’ …The student answered, ‘You get half off with a teacher’s certificate.’”

Boasting explicit phrases and branding ancient scholars as “rogues,” the book “Those Who Don’t Read It Upside-down Are Pigs” might not be a children’s classic, but online commenters claimed they bought the title for their kids, and their kids liked the book of humorous stories.

We’re not necessarily supporting Those Who Don’t Read It Upside-down Are Pigs, or recommending it, but here it is on Dangdang, where it costs 16.40 yuan and has a product rating of five stars with a recommendation rate of 97.7%. Several of the 263 product reviews I saw were variations of “not bad” and “funny.” Buy it while you can.