Insert every Animal Farm reference you can think of. Go ahead, just dump em here. Because they’re appropriate for this story, via SCMP: The Yangcheng Evening News recently stumbled upon Guangzhou Zoo’s entrance exam and found a section of it aimed at evaluating applicants’ “mastery” of Marxist-Leninist thought. This means the 15 zookeepers being recruited at the... Read more » 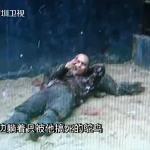 Mental health issues are no laughing matter, and neither is biting a large flightless bird to death. What to call this then? At a zoo in Guangdong province on Saturday, a man bit and killed a live ostrich in front of elders and children, then laid on the dead bird and made gun motions with his finger at the police. The man, 27-year-old Li, was found with a suicide note in his pocket addressed to his mother and girlfriend. 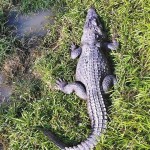 This is sad, aggravating, and horrible all rolled into one. A zoo in Shenzhen has seen about a dozen of its crocodiles die — correction: killed — at the hands of visitors. Reports The Nanfang: Only two crocodiles are left alive of over a dozen that were placed in Rural Grand View Garden, a zoo in Shenzhen’s... Read more » 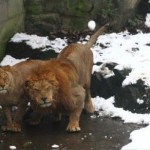 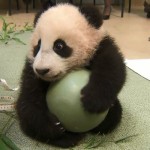 Xiao Liwu, i.e. "Little Gift," was born on July 29 as "Sausage" (which is pretty adorable) before folks voted to change his name. Here he is getting a vet exam at his home in the San Diego Zoo. Follow him on his Panda Cam if you can stand it. 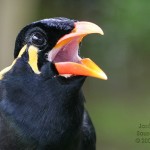 The common hill myna is renowned for its ability to mimic human speech, but what happens when it only mimics humanity’s ugliness? In Jiufeng Forest Zoo in Wuhan, Hubei, one special bird — which began directing dirty words at patrons — has been “isolated for retraining,” according to Shanghai Daily (not the bird pictured above). The... Read more » 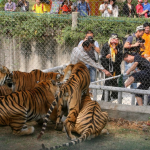 A zoo in Wuhan, Hubei province is offering humans the chance to test their strength against tigers. The newscast tells us that tigers win most of the time, proving definitively that when you come face-to-face with a tiger in the wild, don't challenge it to a game of winner-take-all tug-of-war. A zoo official says that one day, caretakers put a rope in the tiger pen and discovered that the animals loved playing with it. Their next logical thought: human-tiger tug-of-war. 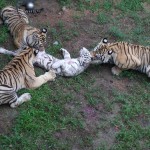 Tigers aren’t so wonderful things sometimes. (Go ahead and skip this story if you’re an animal lover.) On Monday morning at Xixiakou Wild Animal Preserve in Weihai, Shandong province, visitors to the tiger preserve were horrified to find three year-old bengals playing “aggressively” (zoo’s word) with a seven-month-old white tiger. When the above picture first surfaced... Read more » 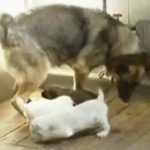 Last week, we saw a dog nurse three kittens. Not to be outdone, a hero bitch in Shangdong province has taken it upon herself to nurse four of a much larger species of cat. On the same day that she gave birth to two puppies, Laifu was asked (forced?) by wildlife zoo attendants in Rongcheng to nurse four white tiger cubs whose mother, Afang, had abandoned them.