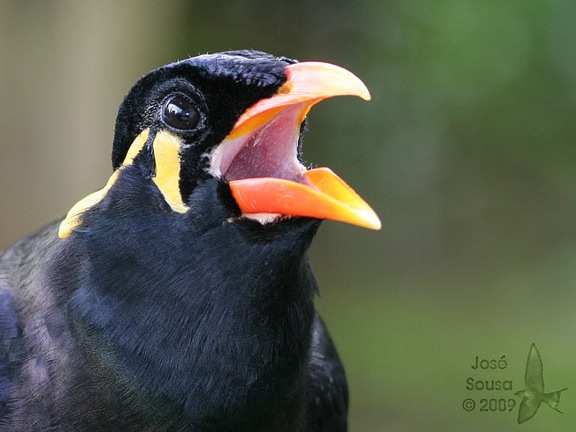 The common hill myna is renowned for its ability to mimic human speech, but what happens when it only mimics humanity’s ugliness?

In Jiufeng Forest Zoo in Wuhan, Hubei, one special bird — which began directing dirty words at patrons — has been “isolated for retraining,” according to Shanghai Daily (not the bird pictured above). The zookeeper, Li Yun, suspects it was badly influenced by zoo-goers — who, let’s face it, deserve to be told off every now and then.

He told the paper that he had heard some tourists try to teach the birds rude words, and said the hill myna is certainly a good learner.

Apparently, the zoo thinks it has a solution:

The zoo erected banners in the exhibit to remind tourists not to teach the mynas bad language, Wuhan Evening News reported yesterday.

Right, because signs in zoos work so well. Just this summer, a baby cygnet at Beijing Zoo died because people ignored the “no feeding” signs and fed it corn kernels, according to Global Times.

On Tuesday afternoon, several children were feeding ducks and other waterfowl with steamed buns alongside their parents, all ignoring signs saying “Feeding is forbidden.”

“This inappropriate feeding killed the animals out of love, but many visitors still don’t get it despite the warning signs,” said the organizer of the zoo volunteers, surnamed Wang.

Out of love… and stupidity. Those two don’t go well together.