In the nearly 10-minute video above, protesters are seen hurling bricks, glass bottles, and other objects at police. Something gets lit on fire around the 5:30 mark.

SCMP reports that running street battles lasted about six hours, and that police fired two warning shots into the air.

Even as late as 8am, an angry mob could be spotted at the intersection of Sai Yee Street and Shantung Street, continuing to hurl bricks and glass bottles into the police lines as curious residents watched from the bleachers and commuters walked to work.

And here’s AP again on the early fallout:

Acting District Commander Yau Siu-kei said 23 men and one woman were arrested on suspicion of assaulting and obstructing officers, resisting arrest and public disorder. The arrested were as young as 17 and as old as 70. Police said 48 officers were hurt by glass and flying objects and confirmed that two warnings shots were fired.

Monday was the first full day of the lunar new year. The street vendors of Hong Kong, even those operating without licenses, have traditionally been ignored during the holidays, and it’s unclear the reasons for the crackdown this year.

CNN has some photos of the Mong Kok riots: 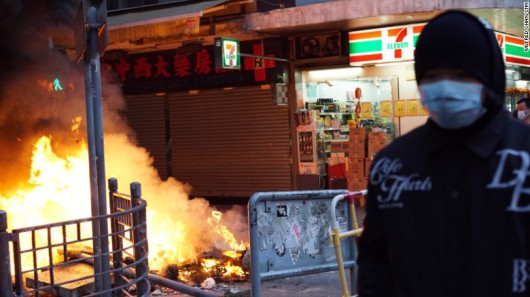