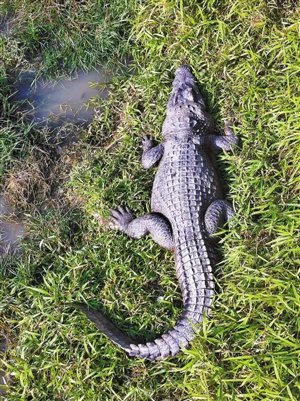 This is sad, aggravating, and horrible all rolled into one. A zoo in Shenzhen has seen about a dozen of its crocodiles die — correction: killed — at the hands of visitors.

Only two crocodiles are left alive of over a dozen that were placed in Rural Grand View Garden, a zoo in Shenzhen’s Guangming New Zone, Shenzhen Evening News reports. The cause of their death? Visitors throwing stones at them and polluting their habitat with garbage.

A journalist who visited the zoo this week reported that, as crocodiles hibernate during the winter, a lot of visitors have been shouting, spitting and throwing things at them to make sure they are alive.

Well… they were alive, you dipshits.

For whatever reason, news of animal abuse has been increasingly grabbing headlines recently — and we hope the reason isn’t because there’s simply been more incidents. (Indeed, as any zoo-goer here can tell you, misbehavior from patrons is the norm.) Maybe, just maybe, we’re in the midst of a conscious effort to highlight inhumane acts toward animals, and out of awareness we will see change, hopefully in the form of one stranger kindly reminding another, perhaps at a zoo, to respect fellow living things.

It’s probably wishful thinking on our part, but better than believing the alternative: that people are just dicks.