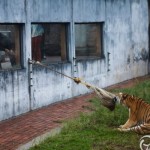 I'm no zoologist, but maybe tigers deserve a bit more dignity than tugging on a knapsack pulled by two-legged jackals? 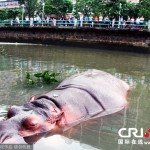 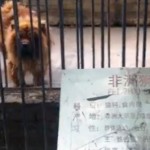 A zoo in Henan recently put a Tibetan mastiff in its lion pen, which had no lion. We have no doubt they did this as a joke, perhaps to see which zoo-goers, followed by news outlets, would take them seriously. But we wonder -- is this "trolling"? Is this "satire"? Is this actually a political statement about the Chinese zoo itself, forcing us -- by caging a household pet -- to see the metal bars which render animals as objects of amusement and belittlement? 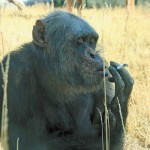 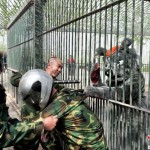 It’s only natural for zookeepers to worry about caged animals getting loose. What is fairly obviously not normal, however, is having humans don animal suits to simulate this scenario, for “training” purposes. These pictures were taken recently from Taiyuan Zoo in Shanxi province. Look at this one: there’s a guy in a white lab coat... Read more » 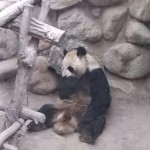 The Sina Weibo user who posted this picture, @哥不一搬3285043987, appears to have absonded from social media, but he/she thinks this giant panda in Lanzhou, Gansu province is dying because the zoo can’t feed it. The post: Lanzhou City Zoo’s panda is the world’s saddest panda. Thin and dirty. So hungry it can’t even walk. Supervisors... Read more » 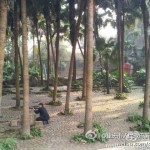 Two lions from the Chongqing Zoo made a dash toward freedom yesterday around 8 am. If you were a wild animal, to say nothing of the king of the jungle, you probably wouldn’t want to stay in a Chinese zoo, either — especially not after shit like this. But the one place worse for a... Read more » 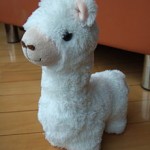 Don’t feed zoo animals. Repeat these four words like mantra. Don’t feed zoo animals. You might think it’s cute to see them chomp down your fucking chocolate, your haw chips, your plastic-wrapped apricot pastry, but then they die. Get it? THEY KEEL OVER AND CEASE TO EXIST. If this still doesn’t register in your brain,... Read more » 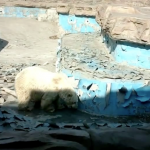 Whether dealing with common pets or endangered species, many humans still don't know how to be humane. But public reaction to conditions at the Beijing Zoo and an incident at South China Normal University in Guangdong indicate that at least awareness is growing among animal advocates and netizens in this country. A video of the poor living conditions of a polar bear at the Beijing Zoo, posted by Sina Weibo user @临临Lynn, elicited a flood of comments yesterday.