A father and his 26-year-old son, Xu Furong and Xu Tiehong, have invented a jetpack in China. Of course they have, because that’s just how the Chinese do. This tandem-operated contraption uses basic Newtonian principles (action-reaction) to blast a human being 30 meters into the air and suspend him there, as shown off on Monday... Read more » 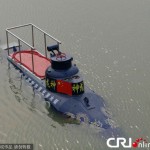 Innovation level: Asian. Earlier this month, Chinese media reported on a homemade submarine called “Sacred Dragon 2,” which creator Zhang Junlin, a retired police officer in Fuyang, Anhui province, said could dive 50 meters underwater and travel up to 15 kilometers per hour. One or both of those figures was probably hopeful thinking, but look... Read more » 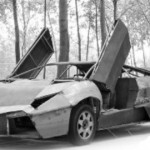 By Alicia This “Lamborghini” made with spare parts from other cars and steel pipes is the ultimate passion project. Wang Jian, 28, from Siyang, Jiangsu province reportedly spent 60,000 yuan to construct this life-size replica model of the classic Italian sports car (maybe the Gallardo?), and slapped on the license plate “王NB0001” (the character is... Read more » 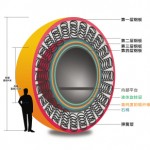 If you can’t find it, build it. Noah’s Ark is the creatively named project of Chinese inventor Yang Zongfu, an insulated, breathable, livable yellow ball that we’re told can withstand 1,700 degrees Celsius of heat, survive a magnitude-10 earthquake, and support life for a year (not like James’s Giant Peach, we don’t think, but it... Read more »
Wearing what could possibly be a fake Lakers jersey and shorts. We think one of his feet is in a plastic tub. The video description says he’s like the wind, which would only be true if the wind lik shimmies like his. Nothing else is known. Youku video for those in China after the jump. 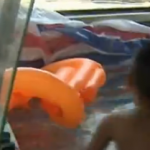 Have you ever been to a Chinese public pool? They're usually crowded, the water's inevitably dirty, and young children should probably never be allowed near. So what do you do when your kid is desperate for a dip? 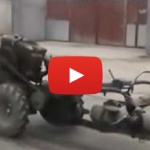 Migrant workers in Wenzhou, Zhejiang province have upped a bar previously set by Sofa Car Man and Homemade Soapbox Derby for Most Unexpectedly Innovative in China. The question: how does one transport an electricity pole from Point A to B without spending the few extra bucks to hire a truck? Answer: Attach the motor of a tractor to one end of said pole, then lay it across a modified three-wheel wagonbed that seats ten people. A cop who saw this said no one had seen anything like it before. You know why? Cause this is China, and it's damn innovative when it wants to be.

Remember that Sofa Car video we brought to you last week? Someone over at Reddit has created/uncovered a GIF of it, and it’s great (h/t Katie). I’m pretty sure there’s only one appropriate soundtrack to accompany this: 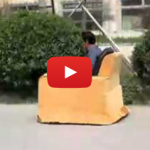 Someone traveling on business in Longkou, Shandong province took this 26-second clip of a guy cruising down the street in a sofa. Nothing to see here. Just driving my sofa. So just to recap: we have villagers constructing homemade electric cars; musicians playing guzheng songs on iPads; people making crossbows and rifles; and a farmer with his nebelwerfer (as Blood and Treasure so eloquently puts it). Can we put to bed the notion that the Chinese aren't innovative? 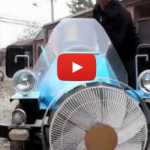 Posted two days ago to Youku (embedded after the jump for those in China), this video currently has 785,000 views. Tang Zhenping, according to the description, is a 55-year-old farmer from Beijing’s Tangzhou Wangji Yongle Town who spent 10,000 yuan to build an electric car that can travel 140 kilometers per charge. Apparently at high speeds, the fan attached to the front of the car begins generating electricity that powers the vehicle in addition to the generator in the back -- however unlikely, it must be said, this seems. Everything about the car is nonetheless impressive, and it reportedly only took three months to design and build.