If you can’t find it, build it. Noah’s Ark is the creatively named project of Chinese inventor Yang Zongfu, an insulated, breathable, livable yellow ball that we’re told can withstand 1,700 degrees Celsius of heat, survive a magnitude-10 earthquake, and support life for a year (not like James’s Giant Peach, we don’t think, but it supports lots of supplies). Also, it’s waterproof.

According to Dongfang News via Zhejiang Online via Qingdao Media (Chinese online news sites are weird), the four-meter-diameter ball can carry 33 tons of water, has a safety seat, lookout system, ventilation, bathroom and living facilities. The ball is built with 3.5 millimeters of steel plate, 57 centimeters of insulation, 300 high-intensity shock absorbing springs and 75 airbags. Yang said vehicles have hit the ball at 100 kilometers per hour, and the people inside report not feeling a thing. The coolest part: between the third and fourth layers is a 10-centimeter layer of rotating liquid, filled with either water or lubricating oil, which maintains the principle of the gyroscope so that people inside don’t roll when the ball rolls.

There’s more. The living space can accommodate three people, with leftover room to store a year’s worth of food and water. The bottom of the ball is reinforced steel, ensuring that it floats right-side-up. There’s also a motor at the bottom to enable navigation in water.

Lest this is all beginning to sound like a hypothetical science fair project, Yang climbed inside the ball on Monday and let himself be rolled from a slope of about 50 meters into a watery landing. When he emerged from the ball, there was a little blood on his mouth, but he smiled and said it was because the seatbelt cut him when he tried to exit the pod.

The contraption cost Yang 1.5 million yuan and took him two years to build. We’re told he has 300 national patents – and the same birthday as Thomas Edison. He’s been dubbed the Inventor King, or King of Inventions. And now we know the real reason the arks in the movie 2012 were stationed in China. 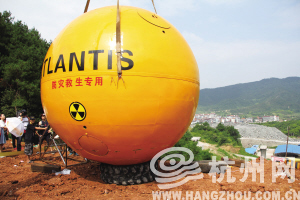 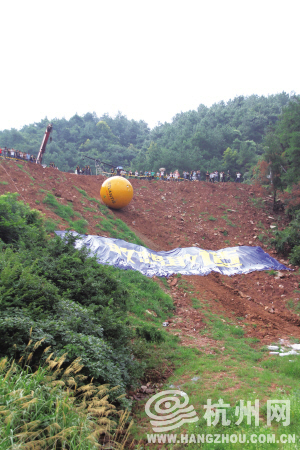 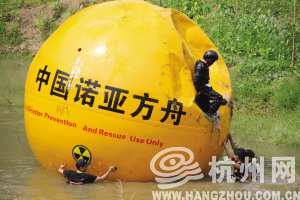 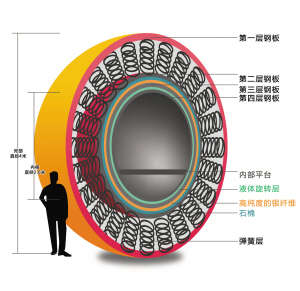 Youku video of the above: