Earlier this month, Chinese media reported on a homemade submarine called “Sacred Dragon 2,” which creator Zhang Junlin, a retired police officer in Fuyang, Anhui province, said could dive 50 meters underwater and travel up to 15 kilometers per hour. One or both of those figures was probably hopeful thinking, but look no further for confirmation that the vessel at least works. Last Thursday, Zhang took Sacred Dragon 2 for a test swim (sink?) in a pond in front of onlookers, including assembled media. The submarine went below surface twice, about five meters both times, before returning to dock. (The journalist in the newscast says it can submerge 10 meters.)

The submarine — 9 meters long, 2.8 meters high and 2 meters wide — has a huge computer monitor in its cabin, with Wi-Fi and air conditioning, and can hold 12 passengers. It cost Zhang 40,000 to 50,000 yuan to build, but it seems like the investment may pay off: tourism companies have expressed keen interest in his design.

This wasn’t the first time Zhang’s built a submarine. His Sacred Dragon 1 made its maiden voyage in September 2010, reports Global Times.

And his wasn’t even the first homemade underwater craft in China. In 2009, CCTV profiled Tao Xiangli, also from Anhui, a peasant who spent 30,000 building a submarine that was “1.5 meters high and 6.5 meters long… made out of oil cans, and is furnished with a lid, an oxygen pipe, a warning light and other equipment.” Tao reportedly told CCTV, “I made the submarine not for a patent but so that a talent scout can discover me.”

You listening, talent scouts out there? If you’re not looking in China, you’re in the wrong place. 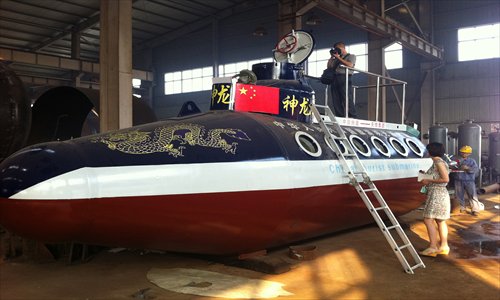 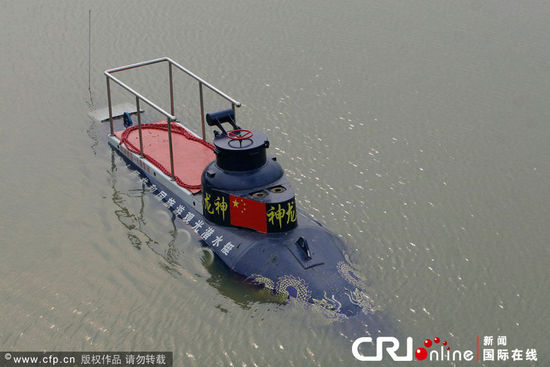 One Response to “Chinese Man Builds Homemade Submarine, And Here’s Proof That It Works”