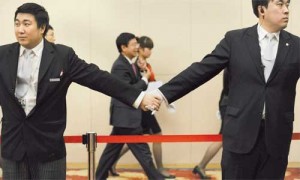 We’re going to start with the good stuff. This article is a surprisingly candid ground-level perspective as told by reporter Xuyuan Jingjing. And here’s James Palmer and Tom Fearon’s recap of interesting stories. Zhang Xiaomei’s proposal to extend public heating to the south actually makes sense (her proposal to change “Women’s Day” to “Woman’s Day” isn’t as useful, I think). And holy shit, yes!

“The most detrimental factor is that society as a whole offers minimal encouragement to youths, who are educated to be merely obedient,” said Xi Yingjie, director of the China Youth and Children Research Center on Friday.

Uh, but no (from same article)…

“There are many ways for a person to succeed. I don’t think Han Han is a rebel,” Zhong said.

However, Zhao Lihong, president of Shanghai Literature Magazine Press, said Han Han’s success could inspire other youths to follow in his footsteps.

Li Xiaolin wants to open “morality file” on all citizens “to hold them on a leash,” seems oblivious to the small irony of saying this while wearing a $2,000 suit. [Danwei]

Zuo Zongshen wants CCTV to broadcast Diaoyu Islands weather, even though no one lives there. [China Kaleidoscope]

I can barely bring myself to type the words Lei Feng, so here, here he is, again, on a cross, which is a telephone pole, because he died when a telephone pole fell on his head.

Ling [Zi], a CPPCC member, is also a scholar devoted to the promotion of traditional Chinese culture and language. In her proposal, she says that starting foreign language education for young children is “highly inappropriate.”

Just in case you were confused:

“I have done the research. None of the CPPCC members hit by the rumors possesses a foreign passport, and the other people mentioned are not CPPCC members,” Zhao Qizheng, a spokesman of the CPPCC, said during an online interview with umiwi.com.

China’s courts dealt with implementing the judgement of 2.557 million cases in 2011, of which 2.394 million were concluded, Wang Shengjun, president of the Supreme People’s Court (SPC), said in a report on the work of the SPC at a meeting of the ongoing annual parliamentary session.