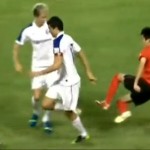 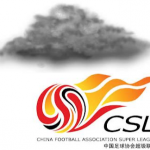 Xu Liang scored a magical goal in the 74th minute of a scoreless match between Guo’an and Dalian Shide in Beijing’s Workers Stadium on Saturday. The ball slipped from a Dalian player’s feet directly to his, and catching a glimpse of goalkeeper Zhang Chong a bit too far off his line, Xu let loose with... Read more » 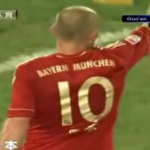 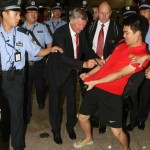 Manchester United landed in Shanghai’s Pudong International Airport just after midnight today and were greeted by hundreds of enthusiastic fans, according to the team’s website. This marks Man U’s first China trip since 2009, part of a wider effort to reach out to the Asian market. It shouldn’t surprise you to know that the Red Devils are... Read more » 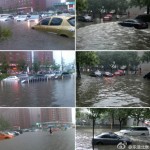 Heavy, heavy rains have again left Beijing’s streets flooded, but that hasn’t stopped tonight’s Chinese Super League match between the hometown Guo’an and Hangzhou Greentown FC. Above, the first goal of the night, putting Hangzhou up 1-0. That remains the score in Workers Stadium as the two teams slog it out in the 77th minute.... Read more » 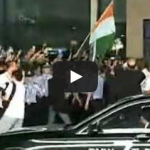 I should mention that the ubiquity of the "shabi" (or "SB" on the Internets) chant in China probably means the real translation should be "asshole," as "cunt" seems to be on a different tier of offensiveness in American English. But I've chosen to go with the literal translation, just because. (In the interest of fairness, we should point out that if a star player arrived in Beijing, Guo'an fans here would chant "Shenhua SB" as well.)