Liaoning Whowin played host to Shangai Shenhua on August 1 (yes, eight days ago; sorry, this is late), which wouldn’t be worth mentioning if not for a terrible, terrible tackle that might be called straight-up assault if it didn’t happen on a soccer pitch. (And if people in real life, hilariously, also could not use their hands.) You can watch it above, or look at the screenshots below to get an idea of how bad it was. 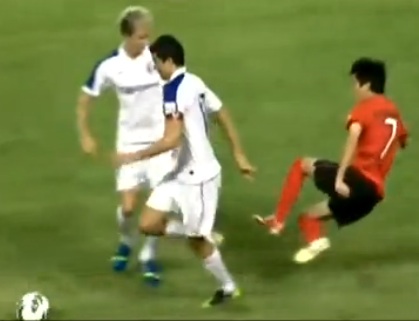 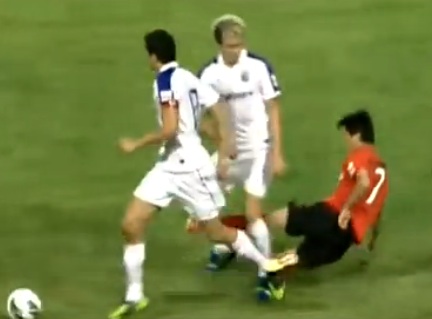 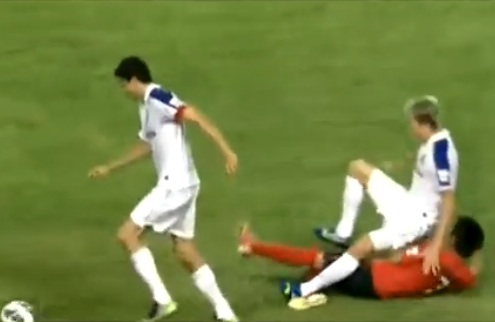 That’s Liaoning’s Zhang Jingyang with a jump-slide tackle on Shanghai’s Dai Lin, who didn’t even have the ball. Nice play, son. You do soccer good.

Zhang then throws up his hands in faux disbelief, as if he didn’t actually jump with both spikes up and cleat the ankle of a player who didn’t have the ball. Yes, angels in the fucking outfield carried you through the air. Shanghaiist asks, “Is this the worst tackle in the Chinese Super League?” and the answer is: let’s see something worse.

Players who should be in the local chengguan brigade, and probably will be when they stop playing: Problem No. 1 with the Chinese Super League.

Shenhua shored up their defence and played possession football in an attempt to run down the clock. But it backfired when a long ball into their box was punched out by Wang Dalei. The clearance fell to Edu, who took a little time to bring the ball under control. Wang rushed out to block, but Edu turned him. As the Brazilian was preparing to shoot, Wang dived at his feet to snatch the ball. However the referee awarded a penalty, judging Wang to have unfairly impeded Edu. The replay is not conclusive but the award appears to be soft. The Shenhua players and bench were absolutely incensed, not for the first time this season dubious penalty calls had fallen on the Shanghai team. However it was of course all to no avail, Wang was booked, then Edu smashed the ball home for a late equalizer.

You only get one look at it here, starting at the 51-second mark, but would you have called this?

Shanghai’s been victimized before by the refs. Here’s a video on YouTube called “Shanghai Shenhua player sent off for dragging ‘injured’ opponent from field.”

If you need more proof of the referees’ incompetence, check this out from a game between Guangzhou Evergrande and Hangzhou:

Youku vids of the above: