While Japanese and Taiwanese ships continue playing with their super soakers in the South Pacific, netizens have commented that the Taiwanese ships don't shoot very straight or with force. Indeed, in the video above, you'll see that it does look like they're just pissing -- which completely makes sense, since Japan and China are just having a pissing contest at this point. 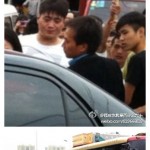 On September 15 in Xi’an, Shanxi province, an anti-Japanese protest got so out of hand that a Chinese man was partially paralyzed when someone clobbered him over the head with a piece of steel. Fifty-one-year-old Li Jianli’s only crime? Driving a Toyota Corolla with his family. His wife futilely pleaded with the mob, “It was wrong of... Read more » 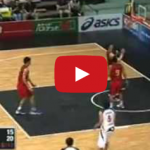 The Chinese Basketball Association doesn't take the FIBA Asia Cup very seriously, as a glance at this year's roster will show: every player under 22 years of age, playing against several countries' senior-level teams. But what happens when your team gets paired against Japan in the knockout round amid nationalistic protests back home against this very country? 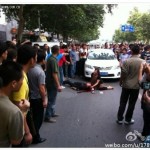 Picture via Beijing Youth Daily The violence and protests have been stowed away like a jack-in-the-box, some novelty toy to be brought back out at another politically opportune time. The carnival’s over, folks. Time to go home. But there’s a thing about violence. You might know it. Violence owes fealty to no one and nothing, and can... Read more » 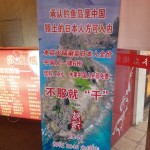 Sent in by an anonymous tipster, a restaurant on Jintai Street near Chaoyangmen offered this sweet deal on Saturday: Japanese customers who recognize the Diaoyu Islands are Chinese territory may enter Japanese customers must pay full price on hotpot, rinsed vegetables at this location Chinese people without exception receive 40% discount Drinks, desserts, and fruit... Read more » 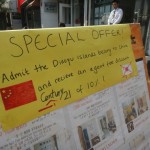 Our Wudaokou correspondent Jacob, who runs the site Beijing Wiki, spotted this advertisement in front of a Century 21 office yesterday. We’d like to bring your attention to two things: the blood dripping from the Japanese flag (someone has an overactive imagination), and the Japanese on the ads. But interestingly, the special offer is only... Read more » 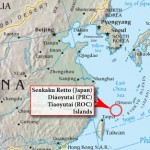 There’s no superlative I can offer for Nicholas Kristof that you haven’t already heard, so let’s just jump to this latest post on his NY Times blog, On the Ground, written by Han-Yi Shaw. Kristof offers a brief introduction to start: This is a dispute that both sides should refer to the International Court of Justice,... Read more » 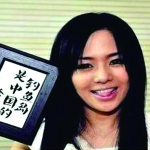 U.S. Defense Secretary Leon Panetta meets Xi Jinping at the Great Hall of the People, via NBC News (picture by Larry Downing / Reuters) As nationalistic fervor cools across the country, here’s one last compilation of Diaoyu-, Mukden-, and Japan-related links.

Japanese ambassador Shinichi Nishimiya committing seppuku when he finds out he's been assigned to China is a nice touch, though perhaps a tad too soon: