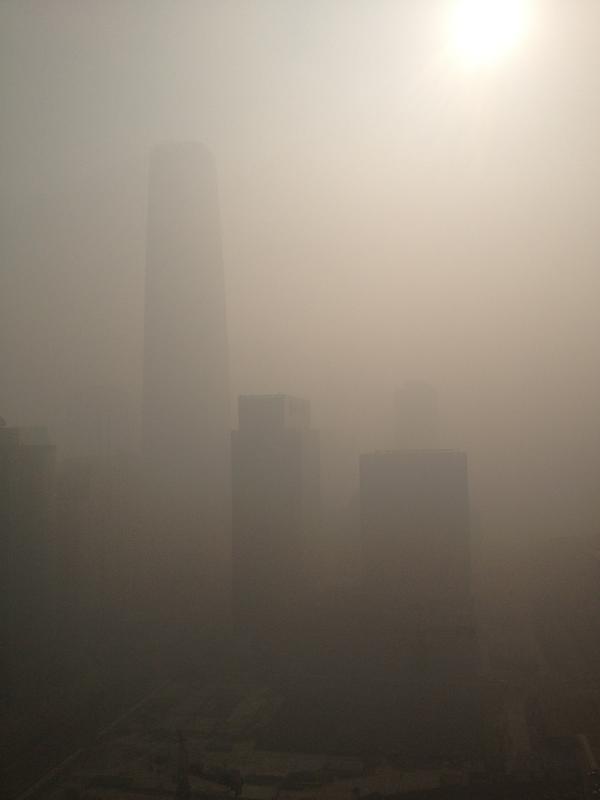 It’s hard to ignore giant killer smog when it descends on your nation’s capital – and also as Hurricane Sandy proved in Manhattan and Brooklyn, it’s hard for the media to ignore it when it affects many of your nation’s top journalists.

It’s not just coverage of killer smog, though, that’s taking over the news, but the environment in general. As of something like 10 am Beijing time, all of Xinhua’s lead stories were about environment-related issues: China’s entry into the International Renewable Energy Agency, plans to look more into nuclear power, petrochemical leaks, crude oil, etc.

My cyber-crush Sinocism had really excellent coverage of this phenomenon in the Monday roundup:

The front page of Monday’s People’s Daily has two articles on the pollution crisis–美丽中国，从健康呼吸开始 (Beautiful China Starts With Healthy Breathing) and 雾霾还将持续几天 各地应对重点：尾气、燃煤、扬尘. The Saturday and Sunday CCTV Evening News, watched by hundred of millions of people, both devoted much of the broadcasts to the air pollution crisis. Today’s Global Times has a very interesting editorial on China’s environmental challenges–环保和发展如何取舍应由社会决定.

This is not an atypical media response: a major crisis happens, the mainstream media latches on, and then something else happens and everyone moves on. (In Chicago, my hometown, it’s like we totally forget we’re the murder capital of America when there’s coverage of shootings elsewhere.)

It’s interesting that though the smog crisis pushes a debate about press censorship/Southern Weekend off the national radar, it does open up an opportunity for another sort of media transparency, as man-made environment problems continue to plague many of China’s cities. That’s because environment contamination, etc., is a tangible thing your correspondents can suffer through, whereas censorship and transparency are abstract concepts.

Sinocism had further things to say:

Media coverage of the crisis is remarkable. Clearly it is impossible to pretend that the air is not polluted or that the health risks are not significant, so are the propaganda authorities just recognizing reality in allowing coverage? Or is there something more going on here, as perhaps the new government wants to both demonstrate a commitment to transparency and accountability as well as use this crisis to further the difficult reforms towards a more sustainable development model?

This probably isn’t a watershed moment, but environmental reporting could maybe kinda be a stepping stone for greater transparency.

This is why all journalism anthologies have stories about chemicals leaks and cancer: because it’s easier to connect the dots there than in a story about, say, how corporate ownership of media in America is limiting press freedom by eradicating local reporting. Stick with stuff you can measure.