Hairong Ma is a Chinese artist based in Baotou, Inner Mongolia. You can check out his work here -- they include paintings with lots of bright, bright colors, such as the above. But we haven't spent much time with his pieces and can't tell you much more about them (they're really bright). What we do want to talk about, however, is his Twitter account. 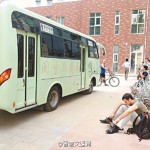 Trial of the century! Please be properly excited. 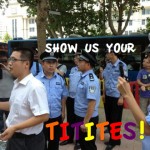 If you're a China correspondent, you're likely in Jinan, Shandong province right now, where disgraced former Chongqing Party Chief Bo Xilai, 64, will stand open trial for corruption tomorrow at the Jinan Intermediate People's Court. Let's have a peek at all the fun. 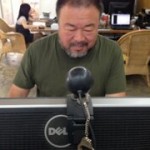 You've heard by now, but Ai Weiwei did something yesterday. And while most reactions to Dumbass, his foul-mouthed song about his 81 days in prison, were predictably enthusiastic, there's a segment of commentators who believe Ai Weiwei is overexposed, and have reacted with what amounts to a protracted and very loud sigh. 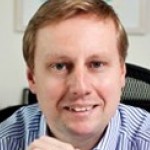 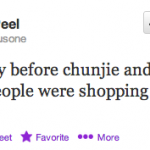 Sarah Peel wins the day. The self-described “cocktail lover, single mom, singer, casual yogini, opinionated Asia watcher, and a master of the preschool dark arts” has just completed tweeting a 27-part homage to Spring Festival. Like Dickens, it’s meant to be read in serial, but if you missed it, here it is all in one place: