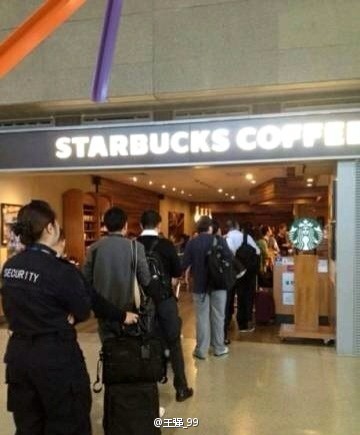 Those ever-vigilant consumer-rights watchdogs over at China Central Television were at it again this week, directing the full fury of their state-backed bite against Starbucks in a seven-minute hit piece on October 20. What got CCTV’s proverbial underpants in such a bunch?

Starbucks dares to charge 27 yuan for a latte.

So what of it, consumers? How angry are you that you can enjoy the same latte for several cents less in London, Chicago, or New York?

@令人无语: The same reinforced concrete, so why is China’s housing prices so expensive?

Hey now, don’t try to turn things on us…

@北京厨子 said: “To show my support, I will go to Starbucks for the entire week next week.”

@王强_99: Thank you CCTV for finally standing up for everyone’s human rights!

The above quotes are via chinaSMACK, Offbeat China, and Jing Daily. And judging by the Twitter activity from this morning and afternoon, I think it’s safe to say that people are opinionated when it comes to coffee, and their opinion is that CCTV can go to hell.

On CCTV’s official account on Sina Weibo, China’s Twitter, the post on Starbucks’ alleged profiteering practices had over 63,000 retweets and over 28,000 comments, most decrying CCTV’s coverage as unfair and unnecessary. “If you buy the goods it means that you have the ability and will to pay the price, and you think that the price for Starbucks coffee is right,” wrote one Weibo user from the wealthy city of Qingdao. “No one forced you to buy it. A poor guy like me would be very content with a cup of Nestle that costs $0.30!”

You shouldn’t play the lute for a cow, nor should you speak common sense to it. CCTV, every few months, will unfurl one of these “investigations” to remind its viewers that we live in a world of haves and have-nots. Yes, Starbucks coffee is expensive. Yes, so are Apple products (CCTV went after Apple in March, even eliciting an apology). And what of it? It’s market economics, the same calculated, cold type that Deng Xiaoping enacted and that businessmen and politicians have been exploiting for decades to make themselves wealthy. But heavens forbid CCTV try to talk — or tweet — about that.

Starbucks has not apologized, but did issue a statement to Reuters:

Each Starbucks market is unique and has different operating costs, so it would be inaccurate to draw conclusions about one market based on the prices in a different market.

Common sense. Meanwhile, the bovine continues to blink and munch, thinking only of the next foreign conglomerate at which to direct its shit.