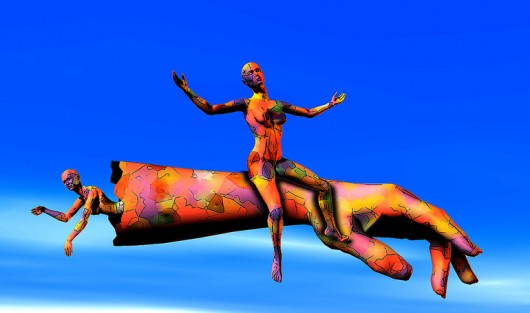 Hairong Ma is a Chinese artist based in Baotou, Inner Mongolia. You can check out his work here – they include paintings with lots of bright, bright colors, such as the above. But we haven’t spent much time with his pieces and can’t tell you much more about them (they’re really bright). What we do want to talk about, however, is his Twitter account.

It’s unclear how long Ma has been tweeting, but on December 11, he decided Twitter would be the best way to introduce himself to the world. Tim Cook, Jonathan Ive, Leonardo DiCaprio, and Emma Watson received this message:

But then, perhaps uncomfortable with the presumption that celebrities would care about him / his name, Ma simplified his message. All but two of his next 33 tweets contained a mere word, “hello,” directed at someone or other. The only two exceptions: “hello weiwei,” for Ai Weiwei, and this from 10 days ago:

Recipients of Ma’s tweets include Ai Weiwei, Kelly Clarkson, The Warhol Museum, Mia Farrow, Taylor Swift, and Karin Giannone of the BBC. To the best of our knowledge, none of them have tweeted back.

Which isn’t too surprising, as public figures rarely acknowledge one-word tweets. But look… Hairong Ma is just saying hi. He really wants to wish you a good day. Will someone please say hello back?