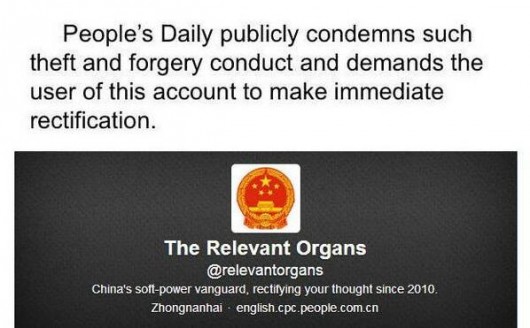 The Relevant Organs has been around since 2010 and literally no one thinks it’s related to “China officials or People’s Daily.” If English-language Twitter users were only as clueless as People’s Daily editors about satire, maybe that notice would have been necessary. As is – holy hayrick of cowdung, PD. (Is this a savvy play for more Twitter followers?) The China Girls blog has a small roundup of reactions from the Twittersphere, e.g., “oh my goodness i’m dying of laughter.” We’ve tracked some more reactions in the Storify below.

The best part is PD uses language parodied by its satirists. Note that The Relevant Organs’s Twitter tagline is, “China’s soft-power vanguard, rectifying your thought since 2010.” Here’s PD:

People’s Daily publicly condemns such theft and forgery conduct and demands the user of this account to make immediate rectification.

First of all, it’s users. Second…. PD is a bit out of its jurisdiction, isn’t it? In any case, it doesn’t look like The Relevant Organs is listening:

We have over 5,000 years of history and 1.3 billion followers once you get rid of a bunch of girls. Which news source would YOU trust?

Smoking gun: So-called @pdchina “caught” us a year after our retirement. Much too fast for a real Party news organ. Rookie move, comrades. 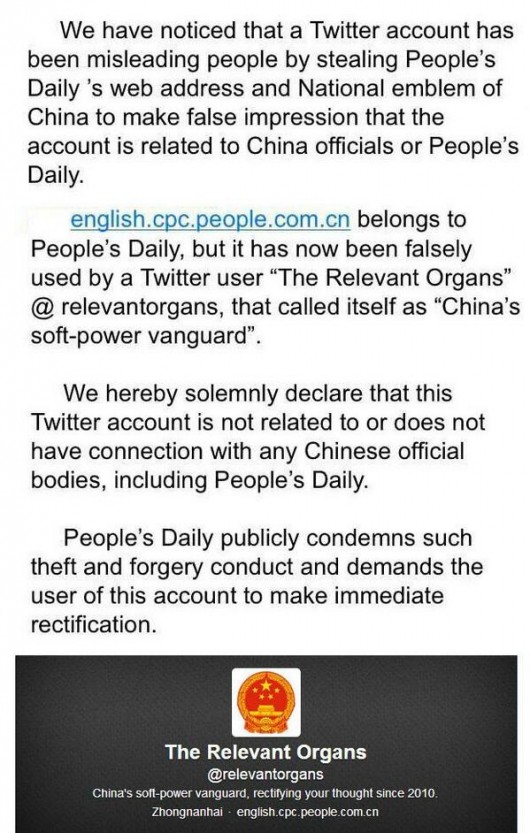