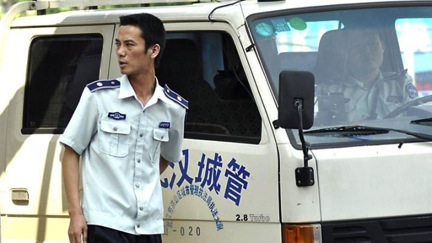 In a story that would make researchers of the Stanford prison experiment proud, on September 20 in a village in Anhui, a 15-year-old surnamed Pan found keys inside an urban management official’s car — a chengguan’s vehicle — hopped in, and almost instantly began trying to enforce the “law” as chengguan would.

According to People’s Daily, Pan went so far as to shout at street vendors, “I’ll give you half an hour to clear out your things, or I’m going to move it for you…”

On one particular stretch of road that usually never sees chengguan, the roadside vendors got suspicious. Thusly called out, Pan ended his power trip.

He later admitted that he did it to show off, for the sake of vanity. Of course he’d had no formal training in law enforcement.

Hmm. Come to think of it, he’d make a great chengguan, actually.