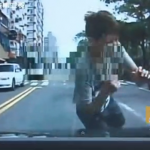 If you're aiming to fake an injury by jumping in front of a car, make sure the target vehicle doesn't employ a dashboard cam. In Kaohsiung, Taiwan on Friday, a pedestrian flung himself -- in slow motion -- onto the hood of a car, then rolled off and laid on the ground waiting for someone to hand him a bag of gold. The car owner stood over him and, unamused, said, "Don't you know I'm a cop?" We don't know whether he actually was one or not, but the driver then appears to point at his dashboard camera, which has recorded all this for posterity and the Internet. Ah, the Internet. Thank goodness for it. And this. And dashboard cams. 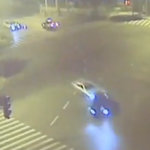 In the early hours of Wednesday, a Mercedes Benz -- going quite fast, if I may say -- bumped the back of a sedan in Wenzhou, Zhejiang province, causing both drivers to lose control. The two vehicles were suddenly in a race to see who would crash first. (Answer: tie?) They nicked three other cars before slamming to a stop, causing a shop's hot water heater to catch on fire. Four firefighting units on 12 fire trucks arrived at the scene, but because five cars successively burned, nearly everything in the store's first floor was turned to ash. There were differing levels of damage on the second and third floors as well.

In Taiyuan, Shanxi province on August 18, a 6-year-old boy called Wen Wen was playing in the parking lot outside his family’s fast-food restaurant when he was hit from behind by a minivan. But not hit, per se -- the van passed over him as he fell forward onto his knees and elbows and curled up into just the right size to avoid death. The vehicle continued to reverse... 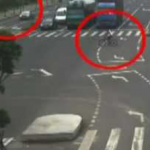 In Ningbo recently, a man on a bike sped through a red light and paid the price. Despite how bad this looks -- flipping onto the top of the car, then landing on the side of his head -- he's not only not dead, but not too seriously injured. The police officer at the end says to those watching at home: "Stop on red, go on green. Don't play around with your life." 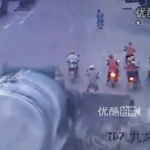 This just had to happen during rush hour, didn't it? Recently in Shijian Town, Nan'an City, Fujian province, a cement truck's brakes failed just as it was approaching a red light. It plowed through eight vehicles -- three sedans, four motorbikes, and one wagon carrying seven people -- before coming to a stop. Very fortunately, everyone involved only sustained minor injures. 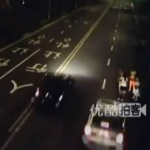 We have no idea why the girls were standing in the middle of the lane, or how the driver of the white Audi didn't see them, or why the black sedan next to the Audi was going so fast. We'll just tell you all we do know: that this happened on Saturday in Haining, Zhejiang province, that one of the girls died, and that the male driver tried to flee. (It's unclear whether he got back in his car and drove away, because we don't see that in the video.) He has since turned himself in to police. 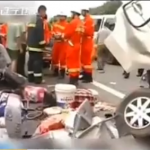 On the same day that a bus collided with a tanker in Yan'an, Shaanxi province, killing at least 36, 12 people, including three children, were killed when a van on an expressway in Sichuan province rear-ended a heavy-duty truck that was parked for tire repair. Xinhua is calling yesterday one of the "bloodiest day[s] in years," and, "In the meantime, lessons must be drawn from the accident so that such tragedies will not reoccur, said an official with the investigation team." 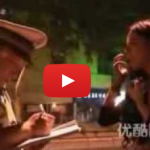 In the early hours yesterday in Nanjing, a fashionable sexy lady by the name of Ms. Xu, shown in the video wearing only black booty shorts, a tiny black top, and what must be five-inch-heels, was seen crawling out of the window of her car after she hit a railing and her vehicle flipped on its side. Xu says she was trying to avoid a taxi that was merging into her lane when she swerved. The accident is still being investigated, but police are already considering the length of her heels as a cause. 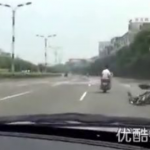 Last Thursday, police in Foshan, Guangdong province were tracking two men on a motorcycle near a tourist area when one of them suddenly tried snatching a woman's purse. Realizing a cop was on its tail, the motorcyclist tried to get away through heavy traffic. One of them even threw a helmet at the car. The chase didn't go well for the thieves, who were eventually subdued and arrested. Police found car-stealing equipment on their bike, according to the Youku video description. 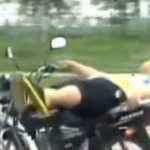 A show on Guangxi Satellite recently showed footage of a man just a bit too cool to ride his motorbike like a normal human being. Apparently he was doing these stunts going at an excess of 60 kilometers per hour (37 mph).