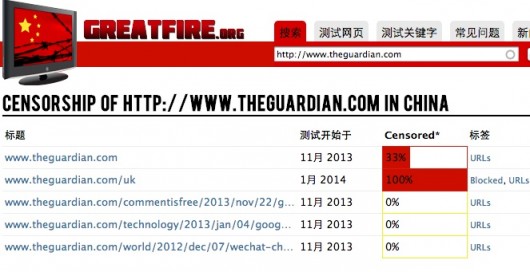 A question worth repeating: has the Guardian been blocked in China? The eye test and GreatFire.org say yes, though we’ve seen technological glitches involving major English-language news sites in China before — Wall Street Journal, namely — so we’re not ready to call this yet. Also, why the Guardian?

Before we get to that last question, a recap: this morning at 10:24, Penguin China tweeted, “Has The Guardian been blocked in China? Can’t access without VPN this morning.”

China watcher Eric Fish confirmed he couldn’t access the site without a VPN, which got the attention of Guardian reporter Jon Kaiman, who was tweeted at in Penguin’s original message:

Can't get on w/o VPN either. Anyone else? RT @ericfish85 Looks like The Guardian may have been blocked in China. via @penguinchina

So, what exactly has the Guardian done recently that might have upset censors? There’s nothing sensitive in its China section, as far as we can tell, with the possible exception of a piece by Kaiman headlined, “Chinese tightrope walkers’ balancing act between Xinjiang and Beijing.” Excerpting the sixth paragraph in a piece about 41-year-old tightrope walker Aisikaier Wubulikaisimu:

Every month seems to bring news from Xinjiang underscoring the troubled region’s entrenched ethnic divide. In November, 11 people died when a Uighur mob attacked a police station. On 15 December, a late-night clash between gun-toting police and machete-wielding Uighurs took 16 lives in the region’s arid west. The unrest reached Beijing in October, when an SUV ploughed through pedestrians in Tiananmen Square and caught fire, killing five people and injuring dozens. Authorities quickly identified the driver as Uighur and described the incident as an act of terrorism, motivated by “religious extremist forces”. Uighur activists abroad called it a cry of desperation, a last-ditch protest against religious and cultural constraints.

Could this have done it? (Shit, can we not write about Xinjiang anymore?!) Is China firing a salvo? Might everything blow over?

Again, we’re not sure, but longitudinal waves are rumbling.

UPDATE, 12:01 pm: And now Jon Kaiman has called it on the Guardian, though with no new info: “The website was first blocked on Tuesday, according to the website greatfire.org…. It is also unclear whether the block is permanent or temporary.”