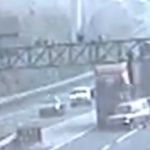 Last week on the Shanghai-Kunming Highway in Jiashan, Zhejiang province, an SUV was desperate to make his exit at all costs. How desperate? Take a look. Fortunately, the two passengers in the SUV suffered non-life-threatening injuries. Live and learn. 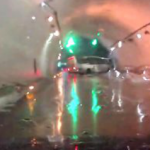 On Jingcheng Highway just outside Beijing on Sunday, a bus with Chengde, Hebei province license plates lost control after driving over water near the exit of Qilinlou Tunnel. It appeared to hydroplane before tipping over and skidding to a stop after several meters. We're told of the 19 passengers onboard, there was one fatality, an elderly man. The other 18 were sent to nearby hospitals. 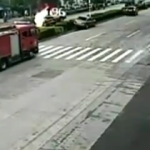 Good Day LA brings us this video from "China." On Saturday, a driver of a black Audi tried to avoid hitting a dog crossing the road, only to get blindsided by another car and sent veering into the other side of the road, whereupon it crashed head-on with another vehicle. To complete this comedy of errors, the Audi then caught on fire. Meanwhile, the dog -- which got clipped but not run over -- spun in circles.

This video, posted earlier today to Youku (after the jump for those in China), depicts a truck carrying liquified petroleum erupting into flames, burning alive the driver of the truck behind it. 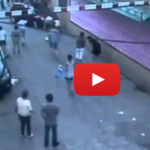 We've seen the consequences of drivers who confuse accelerators for brakes, which are sometimes awful, but never anything as jaw-dropping as this. In Ningbo, Zhejiang province on July 26, a red car plows into a woman and child riding an electric bike, and for whatever reason, the car doesn't stop until it hits a wall. The mother and child completely disappear underneath the car as those nearby are sent scampering. 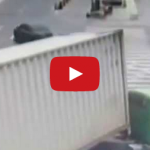 A driver in Wujiang, Jiangsu province recently said "not today" to death when he slid from the driver's to the passenger seat in the nick of time. Sensing an oncoming truck with a wide load was about to tip over -- seemingly in slow motion -- the driver managed to reposition himself inside his sedan, which wound up being completely smushed. 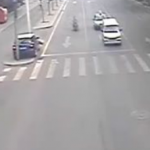 Surveillance cameras in Luoyang, Henan province captured this excellent bit of parallel parking last week. We don't think the world-record holder in parallel parking could do any better... you know, if the requirement was to park between a lamppost and a tree, on the wrong side of the road. Originally posted two days ago, this video called for music, so I added Second Hand Rose's "Wolf Heart Dog Lungs" (二手玫瑰 《狼心狗肺》), which starts at the 15-second mark. Enjoy. 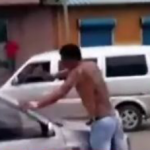 Remember the advice that Nanjing motorist -- who, even after suffering a split lip at the hands of a bully on the road, refused to fight back -- gave last week? About the importance of keeping your cool, especially during "summertime," and how "a gentleman uses his mouth, not his fist"? There were some people in Tangshan, Hebei province recently who heeded none of it. 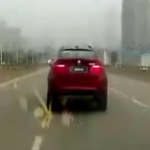 First, the video: watch as the driver with the dashboard cam futilely tries to pass the red BMW 4S, whose license plate reads BMW X6 (we understand this car was from a dealership, and the man inside was going for a test-drive). Something obviously happened between these two guys before the recording began, and the road rage must have festered. The BMW driver engages in a bit of street gamesmanship for nearly two minutes, then stops, and that's when the dashboard cam driver sprints out of his car and chases after the BMW.