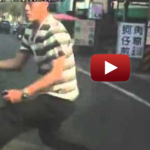 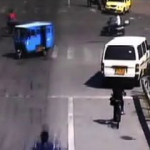 In Hangzhou, Zhejiang province, surveillance cameras recently caught this perfect storm of an accident involving a motorized three-wheel wagon and a bicyclist. The man driving the three-wheel wagon swerves and loses control when the bicyclist cuts in front of his path. Neither saw the other coming due to another trike that was in the exact wrong spot in the intersection.

A bus in Shanxi province, time unknown, flew off the road and into a ditch more than two meters deep, flipping at least once along the way, killing three of the 24 passengers, two of them instantly. Want to see what that looks like? Great! Look at the above video.

On Tuesday at the intersection of Airport Avenue and Pujiang Street in Wenzhou, Zhejiang province, a bus lost control on a slick road and rammed into a Nissan parked in another lane. There were no serious injuries, but let this be a reminder to everyone that roads are not safe, and much less so when it's been raining. 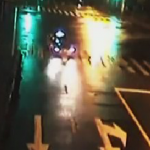 The driver of an unlicensed taxi in Shanghai who ran over a German this summer had his day in court yesterday, getting sentenced to three years and three months in prison, according to Dongguang News. But first, to the recently released footage: Around 3 am on July 15, a German named Sasha and two friends got in an unlicensed taxi operated by Wang Mou. 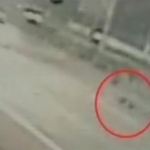 An appalling story to report from Hunan. On Tuesday at around 1 pm, a 24-year-old traffic cop named Li Xiaofeng made what appeared to be a routine stop at a toll booth of a truck that he suspected was overweight. He put himself in front of the truck, but the driver wouldn’t stop. When a... Read more » 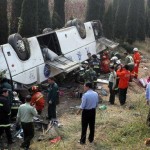 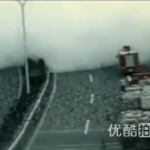 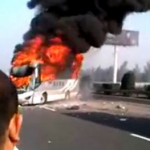 We now know that the bus that crashed on the Beijing-Tianjin-Tangu Highway on Monday, killing five German passengers and one Chinese, was carrying a delegation of doctors and medical students from southern Bavaria. There were 19 German tourists plus their Chinese tour guide and driver. The accident occurred when the bus apparently rear-ended a large shipping truck. Once the bus caught fire, there was really nothing anyone could do except run from the flames.