He asks if I have read his latest book, and I politely answer that my Chinese reading is not up to scratch. “Don’t worry, we have that problem too,” he kindly replies, and, for a moment, it sounds a little like he hasn’t read his own book. 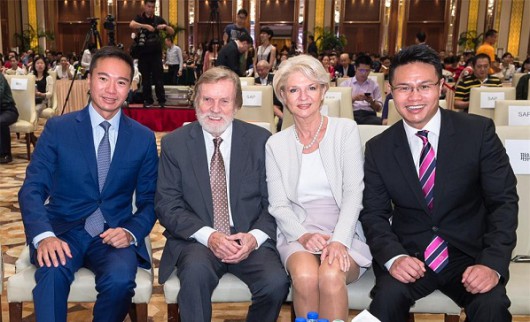 The Naisbitts with Ken and Tenniel Chu at the world’s largest golf resort, where the seminar took place

I’ve nothing particularly against Westerners that end up as apologists for the Chinese government. I can see how it happens, even indulged in some myself. In my early mid-twenties years in China, my teaching days, students would occasionally disarm me by asking my thoughts on China’s political system. I would stutter that things were probably getting better… China was unique… complicated… it was easy to criticize. Mine was a shitty answer, informed by a misplaced blend of politeness, sincerity and fear of being shot; while I believed that the arc of the universe was long and full of bastards, I hoped it might also bend toward justice. But that was 2008 – the heady days of that great modernizer and moderate comrade, President Hu Jintao.

I doubt many readers will be that familiar with John Naisbitt, or his 1980s Megatrends franchise. But back when it was “Morning in America,” Naisbitt’s book Megatrends (1982) sold the best part of 14 million copies and was widely hailed as having predicted “the Information Age.” Now this aging visionary is embedded in China, and I was eager to see his predictions for an Asian-Pacific century.

In hindsight, I’d have been better off staying at home, reading straight from the Communist Party copybook (you know what they say: starve a cold, feed a fever, Xinhua a hangover). 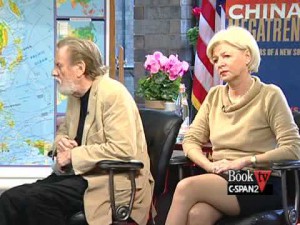 Sitting in the bowels of a huge, illegal golf resort, situated just outside Guangdong’s fourth most famous city (sorry Foshan – I have you marked as five), Naisbitt, 86, with his younger Austrian wife and co-author, Doris, went through a list of central office memes – “hostile” Western media (a constant refrain); the decline of the West; the inevitable rise of China; its meritocratic leadership; the ineffable glory of the Chinese Dream.

The latter was particularly harped on, probably due to its close association with President Xi Jinping. Apparently, it’s like the American Dream but Chinese, so quite unique. At the no-fee seminar, entitled The Global Game Change Talks China, I further learned that Xi’s latest edict to build a “New Silk Road” was a monumental task of a kind never before conceived, and perhaps never again. Forget about the old Silk Road – the Naisbitts compared Xi’s one to the moon landings. Three times.

All this was ostensibly in aid of the couple’s latest book, Global Game Change: How the Global Southern Belt Will Reshape Our World, published last January (Chinese only, alas). But it’s difficult for me to give you a proper appraisal of the book’s central thesis here. Rather than iterating this global transformation in any practical terms, the Naisbitts simply cloved to tired Party maxims: the most specific takeaway was that the “Global Southern Belt” – a term previously unfamiliar to this news buff, but roughly equating to Africa, South America, and China – is going to completely change the way the world works, because that is where the major economic growth lies; not in Europe or North America. The theory could be a lot more sophisticated than that, and probably is, but nothing in the seminar suggested so.

What Naisbitt did emphasize, though, were his credentials.“The Financial Times said I did not get even a single thing wrong,” Naisbitt noted at several points, referring to the original Megatrends. But 1982 was a long time ago. Since then, his career has had two main phases.

First, dining out on Megatrends. Spin-offs include Reinventing the Corporation: Transforming Your Job and Your Company for the New Information Society (1985); Megatrends 2000: Ten New Directions for the 1990s (1990); Global Paradox: The Bigger the World Economy, the More Powerful its Smallest Players (1994); and Megatrends Asia: Eight Asian Megatrends That Are Reshaping Our World (1996).

I said: “President Jiang, Taiwan is a small story. But it tells it very well. China has a big story; it’s a pity it’s being told poorly.”

President Jiang thought for a moment and said: Why don’t you tell this story?

Naisbitt eagerly took up Jiang’s offer, and performed about as badly as it’s possible to do. China’s Megatrends dropped in 2010 and was soundly thrashed by reviewers both in China and abroad (“Its depth is even less than an educated staff at the lowest level of the propaganda department,” noted one Chinese reviewer; another observed: “To put it plainly, it is propaganda. There is no intellectual value in it.”) Naisbitt subsequently dropped off the English-language map, but has kept his mainland publisher busy with 2012’s Innovation in China: The Chengdu Triangle and, latterly, Global Game Change.

A universal criticism of China’s Megatrends was its piss-poor research methods (as one reviewer noted, “[the Naisbitts] hired dozens of students and instructed them to comb provincial [state] newspapers… Using this pile of ‘objective facts’ to understand China in a new way”). When asked about his research on Global Game Change this time, Naisbitt gives a vigorous response: “Talking to people. That is the way to do it. Get in on the ground and actually talk to people. It’s more visceral. We have spoken with hundreds of people in China from all over the place.” In which case, where is the variety of opinion, the diversity, the doubt? Why does everything from their lips sound like a Communist Party self-help tape?

Asked by a Hong Kong journalist about the city’s place in the world after the Occupy Central movement of 2014, Doris smoothly interjected before John could respond: “Hong Kongers have got to learn to push, but not push too much.” She then switched topics to emphasize the importance that China “tells the world of its beauty,” and how much of the world, for example, was not even aware of the pure, natural beauty of the city she was talking in right now.

I glanced around, making sure of my surroundings: a second, probably third-tier city that barely existed 40 years ago, utterly devoid or depreciated of any natural beauty at all. Later she told another exasperated interviewer, “The likes of what China is going through now is more significant than the Reformation.” 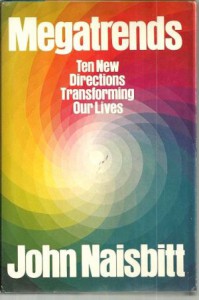 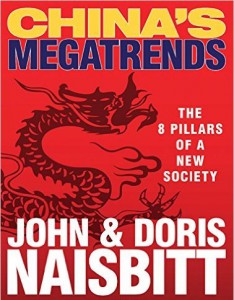 For as long as China has fumbled at “telling its story,” there has been a fawning foreigner willing to try his hand, accepting its coin while turning a blind eye. From Edgar Snow via Robert Kuhn to more recent let-us-welcome-our-new-masters evangelists, such as Martin Jacques and his bargain-basement Marxist colleague John Ross, the formula is the same – access in exchange for acquiescence. Having established the Naisbitt Institute in Tianjin, and been largely ridiculed outside Chinese media for his output since, Naisbitt is perhaps the granddaddy of them all. But what does it profit a man, etc.?

That is what I wonder as Naisbitt, who makes his way to the podium with obvious care and difficulty, winds down his talk. Apparently, he has other engagements in other cities to come – where he gets the energy from is anybody’s guess. Although he has the beard and former build of a Victorian polar explorer, Naisbitt looks faintly exhausted at the meet-and-greet after. He asks if I have read his latest book, and I politely answer that my Chinese reading is not up to scratch. “Don’t worry, we have that problem too,” he kindly tells me, and, for a moment, it sounds a little like he hasn’t read his own book. (I briefly imagine Naisbitt being told by some mid-ranking official what is going on with his next book, how much he’ll be paid, what the talking points are, as he politely nods away and looks forward to lunch.)

Blandishments from those within the system are part of the game. When an economic aide to the leadership told the Wall Street Journal at Davos that, “China is blessed with the strong and long-term focused leadership of President Xi Jinping, the best leader in the world,” the reaction is to snort. But there’s also a wince at the evident requirement for the wise but wretched official, forced to spout such dismal obsequies. No such charity can be afforded to the foreign water-carrier, however, whose motives, devoid of political or ideological imperative, are typically base.

The thing is, Naisbitt must on some level believe everything he says. What else could possibly possess a man of that age to spend his twilight years as a lickspittle attraction, wheeled around various Chinese backwaters bombastically mouthing propaganda? But I wonder who else does – surely not the propaganda chieftains, who have so little confidence in what they’re saying that they fall over foreign mouthpieces to speak on their behalf? On the way out, I ask a straitlaced journalist from Shenzhen Daily what she thought of the whole thing. “Too pro-China,” she replied. “Boring… The government will like it.”

The author is an itinerant filmmaker in South China. Additional reporting by BJC editor-at-large RFH.

8 Responses to “Mega Fail: How A Bestselling American Futurist Lost His Way In China”