The first authorized English production of Yasmina Reza’s Art begins its four-day Beijing run from tonight, May 11. Since the London premiere of Christopher Hampton’s translation, with Albert Finney, Tom Courtenay and Ken Stott as the three principals, Marc, Serge and Yvan, Art has raked in over $250 million worldwide, showcased innumerable all-star lineups, stunt casts (including The League of Gentlemen), and award-winning performances.

This latest China-based production of the comedy is not about money, stars, or even an Expat in Chinese Film and TV Award: It’s about the art. To learn more, and help shift some tickets, Beijing Cream had a quick chat with the cast of this 90-minute modernist comedy about “three people losing their shit over a painting” (curtains rise 7.30pm on Thursday; tickets 100 kuai). 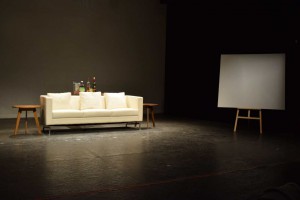 Carlos Ottery (actor, Yvan): A screenwriter pal of mine, Peter, wanted to direct the play in Beijing a few years ago but it fell through, as these things often do… putting it on at has been at the back, the very back, of my mind for quite a while.

Gregory Joseph Allen (director/actor, Marc) From the very beginning this has really been all about a small group of like-minded artists falling in love with a script and wanted to share it with others. Oh, and chicks dig theatre nerds… they do, right? Right? I hope that I didn’t just waste three months of my life. Shit.

BJC: Why are there so few small indie productions, like Art, in Beijing?

CO: Money. Unless you are talking about a big Broadway-style show or a particularly commercial performance, theatre makes bugger-all cash. These days a lot of people in Beijing are in things for the money alone…People prefer to lose 10 million dollars on a film that will never get made, or to watch something with Vin Diesel topless, and who can blame them for that.

The other thing is censorship, which seeps in everywhere. It effects everything: public discourse, books, TV, theatre. Who can be arsed putting on a good show, only to be told at the last minute that the censors want you to change things, due to some imagined sensitivity?

GJA: Because producing a play of any kind is really fucking hard to do, dude. I am only kind of kidding… There is just a lot involved in the putting-together of a play intended for public presentation, and unless you are really passionate about what you are doing, it’s hard to justify all of the time and work that it takes to get it done. Also, there are only so many theatre-loving expat actors in Beijing… Most of the quality actors that I know are trying to pay the bills by gigging in the local film and television market. They don’t really have the luxury of taking the time to do a play. 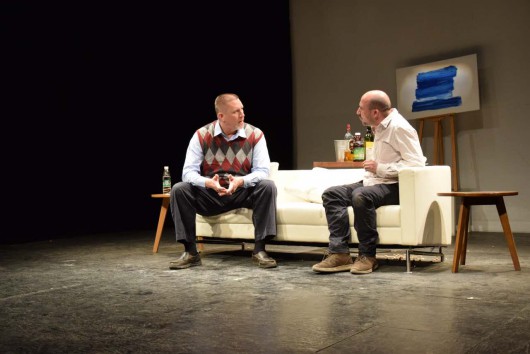 But is it Art? Greg’s knitted vest raises challenging questions

BJC: What are the cast’s theatrical bona fides – other than being three out-of-work chaps who can speak English?

CO: Ha. You have got me down. Even when I am gainfully employed, which I occasionally am, people still seem to think I am out of work. I think it something to do with the way I dress.

Greg is a good one to deconstruct. He played American football in his youth and he has that build, a cross between a drill sergeant and a bouncer. Yet at the same time, he strides around rehearsals quoting Shakespeare soliloquies… he lives and breathes theatre. He’s done hundreds of Equity performances, talks endlessly about Chekov and Stanislavsky, that sort of thing. Basically, if the show comes anywhere close to being remotely professional, then it is all down to him.

GJA: Stand back, bitches, and let the tootin’ begin… I have been acting for about 40 years. I have been in over 100 stage productions of one kind or another. I have a B.A. in Theatre Arts, and an M.F.A. in Theatre Arts: Acting and Directing. I have spent the last six years teaching theatre at Tsinghua International School, and since arriving in China I have had the pleasure of acting in several locally produced films [note Gregory’s role as “American Prick” in last year’s Jackie Chan-Jonny Knoxville flick Skiptrace– Ed]. And if you have ever wondered, yes, it is pretty fucking cool to see your big-ass head on an IMAX screen.

CO: Then there’s Sam [Kamanguza, who plays Serge]. A very cool character indeed. Ice-cold. My complete opposite on the stage. I’m all nerves, jangling around, barely able to stand still, and Sam will just stand opposite me and toss out his lines, like someone out of an old cowboy movie. Maybe inside he is all jittery and faking it, but I don’t think so. Funny too – has some great stories about guys in urinals standing next to him to, erm, check him out. Wonder how controlled he is then.

BJC: Have you paid much attention to the recent Art revival in London?

CO: I saw the three ‘actors’ give an interview on Youtube. One of them was talking about what a great job he had done with his lines, and I remember thinking, ‘the smug git’ – only because I have had such a struggle with learning mine, obviously.

GJA: A couple of my colleagues had the pleasure of seeing it recently. They had nothing but praise for it. If we can deliver anything even near to what they are sharing on the east end, I would consider our production a success.

What particular relevance (if any) will Art hold for a Beijing audience?

CO: These days, China is famed for people paying millions of dollars on art of very questionable value. The play certainly taps into that. There’s also a lot of stuff about the getting rid of the old, to replace it with stuff that is ‘modern’, for no real reason other that the sake of it. I know Beijingers will be able to understand that.

For me the play is really about three blokes arguing to the death over something (seemingly trivial), simply because they have known each other for so long that they can. I think people can relate to that anywhere… 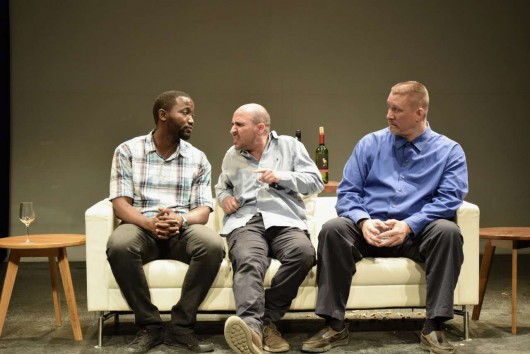 BJC: What difficulties did you face mounting the play in China? Did you at any point find yourself wishing to punch a nearby wall?

CO: Getting ‘official approval was a problem… our producer was able to pull some strings with the relevant departments at the last minute and rush things through. Fortunately, three blokes losing their shit over a painting isn’t deemed a sensitive issue.

GJA: Producing a play anywhere usually produces a few “wall punch” worthy moments, but our process has been relatively stress free… I wouldn’t be surprised if we sent a few walls to the emergency room before it is all said and done.

CO: It’s put me off producing for life. When it is all over, am gonna switch off my phone, and spend a week in my bed doing nothing but drinking cider, and eating sandwiches. Whilst theatre is a mild passion, what I really like to do is make sandwiches. Recently, I have been experimenting with homemade shish kebabs. I get some lamb skewers from a local Xingjiang place, make my own chilli sauce, throw it in a tortilla from the supermarket: Less stressful than theatre production. And cheaper 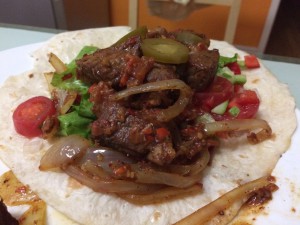 A homemade kebab, courtesy of Carlos