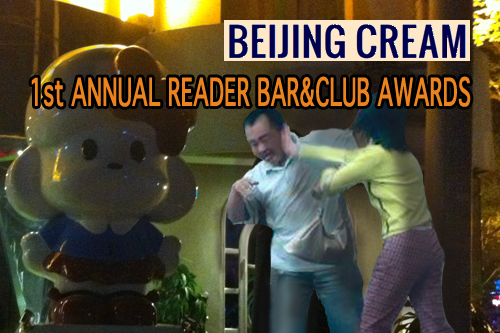 Three days ago we introduced the 1st annual Beijing Cream Bar and Club Awards (image credit Katie), with 22 questions divided into five categories. We’ve had contributions from Piper Fisco, E, Kevin Reitz and Scott Grow. To examine the fourth of our five categories, Meta, we’ve invited somewhat of a bar expert. It’s all too fitting.

Why Even Call it Happy Hour if You’re Only Going to Lower Prices on Tsingtaos by 5 Kuai (i.e. The Tim’s Texas BBQ Award)

Seeing as Great Leap does not have a happy hour to be spoken of, they are automatically out of the running. I think Tim’s Texas BBQ takes the cake on this one.

Way Too Far For You to Care

I really don’t care about any of them. But if I had to choose the one I cared LEAST about, I suppose Swan Lake. I don’t even care enough to know what that bar is. And I bet it’s really far away. [Editor's note: I can't remember where I saw mention of this bar called "Swan Lake," but now that I try to find it online, I can't. Did I just make the bar up? Would appreciate hearing from someone who's actually been to Swan Lake, which may or may not exist in Beijing.]

I hate electronic music, so this one is really like shooting fish in a barrel. I… hate… Lantern. If the music was actually at a volume that you could bear, then maybe it would be excused. But my eardrums bleed every time I walk in there. Lantern gets my vote for worst music.

Only in China would there be bars that have these names. Awesomeness Bar is clearly screaming for attention, but I won’t give it the satisfaction of winning ANYTHING. Cocky bitch. Also won’t dignify Pure Girl with anything. Perhaps 9.9 is the least offensive to me, enough that it’ll get my vote.

Bar You Have Not Been to But is Actually Not Bad

Loretta has been in Beijing long enough to know more people than you, and care less. But that doesn’t mean you’re a worse voter … all nominees in the Meta category and the four others – Dross, Repugnance, Alcoholism, and Sex — are right here:

6 Responses to “BJC Bar And Club Awards: A Closer Look At The “Meta” Category”