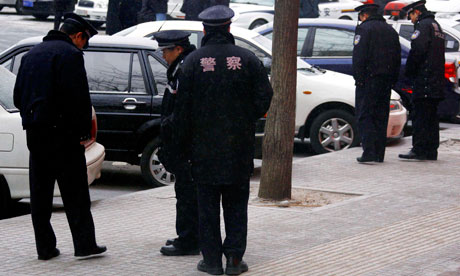 On Sunday, Beijing Youth Daily reported that Beijing had sentenced “10 people to up to 18 months in jail for illegally detaining petitioners from another city” (Reuters‘s words). It was, as Reuters noted, “a rare case of the judiciary taking on the shadowy men who operate on the margins of the law.”

Ah, but not so fast. As Tea Leaf Nation explains, there was immediately skepticism from Chinese netizens, who are as grounded a bunch as you’ll find anywhere. “Many users saw the move as a mere ‘palliative’ that targeted a ‘bunch of little minions’ rather than the ‘big fish behind the scenes,’” TLN wrote. “One demanded, ‘Investigate: local governments are in league with evil forces; who is authorizing this? Who is in charge?’ Another called the phenomenon the product of a ‘warped society,’ and another argued that ‘the best way to avoid petitioning is to get at the crux of the problem.’”

And now, the latest, is that the arrests might not have ever happened. (TLN points out via Gady Epstein that China Daily had the news first, in an article since pulled from its website.) Via Global Times:

A Beijing court Sunday denied a report that 10 people who had intercepted and detained petitioners coming to Beijing were sentenced for illegal detention on November 28.

“The court did not pass sentence on a case like that on that day and we are investigating to what extent the story was untrue,” said Huang Shuo, spokesman for Beijing’s Chaoyang District People’s Court, telling the Global Times that the widely circulated report was fake.

A report by Beijing Youth Daily said that 10 suspects, including three minors, from Changge, Central China’s Henan Province, had detained a number of petitioners travelling from Henan to Beijing to petition higher authorities.

That leaves us back at square one, where extralegal agents continue to roam, and black jails exist. Meanwhile, no one is the change they seek. Instead, we all wait — for the next piece of good news that might, just maybe, actually stay good.